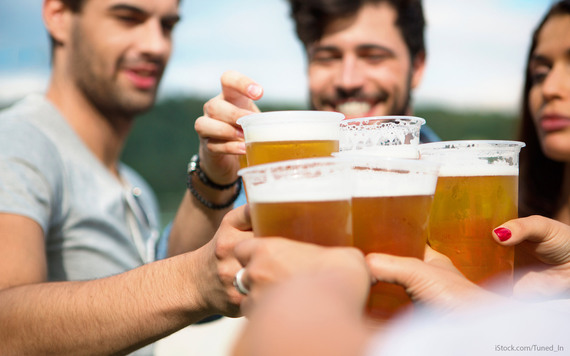 Thursday, April 7, marks the celebration of National Beer Day 2016. Most Americans honor this holiday by hitting the bars, brewing their own beer at home and anything else that serves as an excuse to drink.

National Beer Day isn’t just a holiday about drinking beer, though: It commemorates the end of Prohibition in the U.S. President Franklin Roosevelt signed the Cullen-Harrison Act on March 23, 1933, ending the 13-year ban on alcohol. Though the law didn’t go into effect until April 7 that year, anxious revelers lined up outside breweries on the night of April 6 — now called New Beer’s Eve.

Visit GOBankingRates for deals, discounts and freebies from the top retailers >>>

Americans still love to drink beer, spending an average of $1,270 on it every year, according to Survey Analytics. But have no fear, beer lovers: National Beer Day doesn’t have to cost you an arm and a leg. With the help of Slickdeals andCouponSherpa — and plenty of beer discounts, sales and happy hours — celebrating just got a little easier on your wallet.

Infographic: How Much Are You Spending on Beer?

The History of Beer

Now that you’ve decided where to go drinking on National Beer Day — and how to save while you’re at the bar and at home — it’s time to brush up on some beer history.