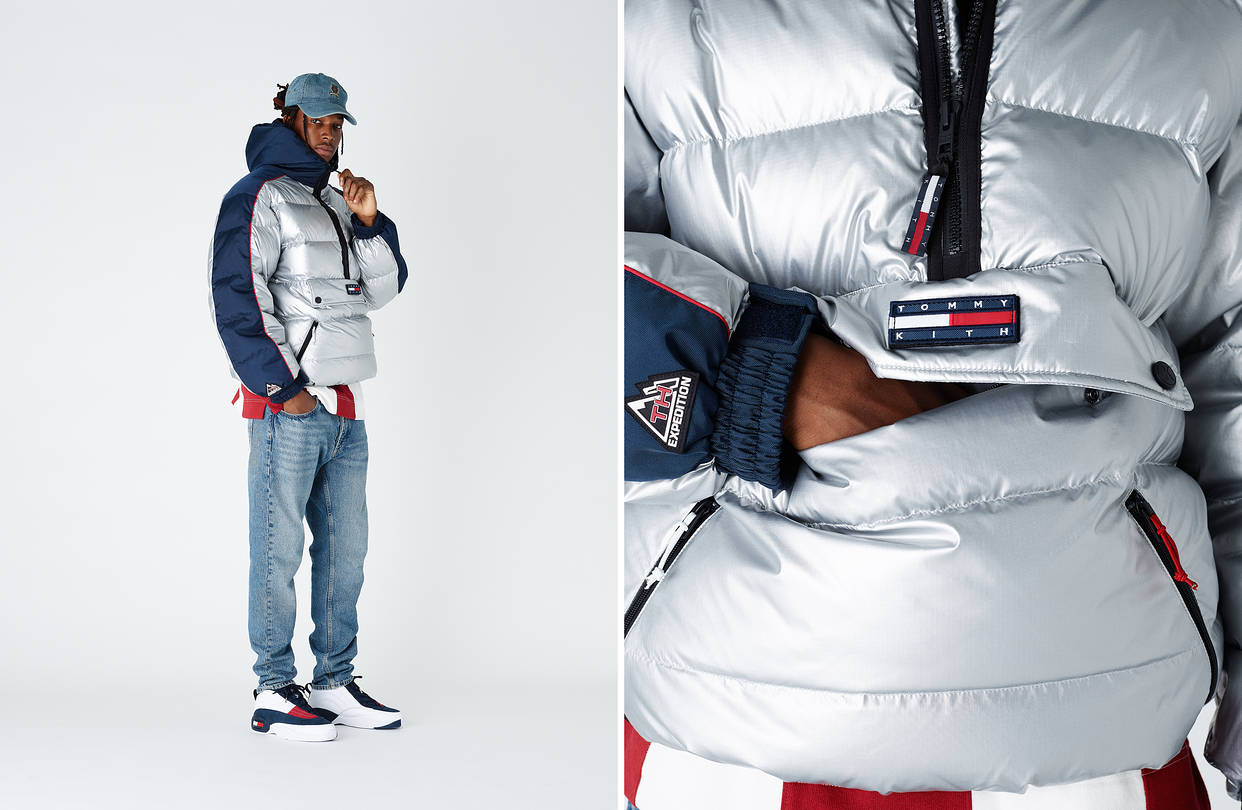 THOUGH HE’S ONLY 21, Dom Hadley owns nearly 30 pieces of vintage Tommy Hilfiger clothing, a collection he’s cultivated over the past four years. Yet many designs from the brad’s ’80s and ’90s heyday have eluded the college student from Liverpool, who also runs a YouTube channel dedicated to vintage clothes. So the news, this past August, that Tommy Hilfiger was reissuing certain iconic styles in partnership with New York streetwear store Kith thrilled Mr. Hadley. “That collaboration is just crazy because some of the pieces [Mr. Hilfiger and Kith owner Ronnie Fieg] chose for the collaboration, they’re all like the rarest vintage pieces,” said Mr. Hadley, who bought a zip-necked rugby shirt from the collection during a trip to Manhattan.

Increasingly, the vintage styles sought by young men like Mr. Hadley are reappearing on racks. Brands like Nautica, Ralph Lauren and Guess Jeans have all reissued, in one form or another, archival designs of the 1980s and ’90s, and this month, Perry Ellis jumped on board with a limited collection of retro re-releases, the original designs tweaked only slightly. Perry Ellis designer Michael Maccari reports that when he and his team “were looking back at the archive,” the younger staffers said they would wear the color-blocked cropped anoraks and bomber jackets that defined the brand’s pre-2000 heyday. These ’90s looks have come full circle, embraced by a generation of vintage-minded millennials that missed them the first time around. 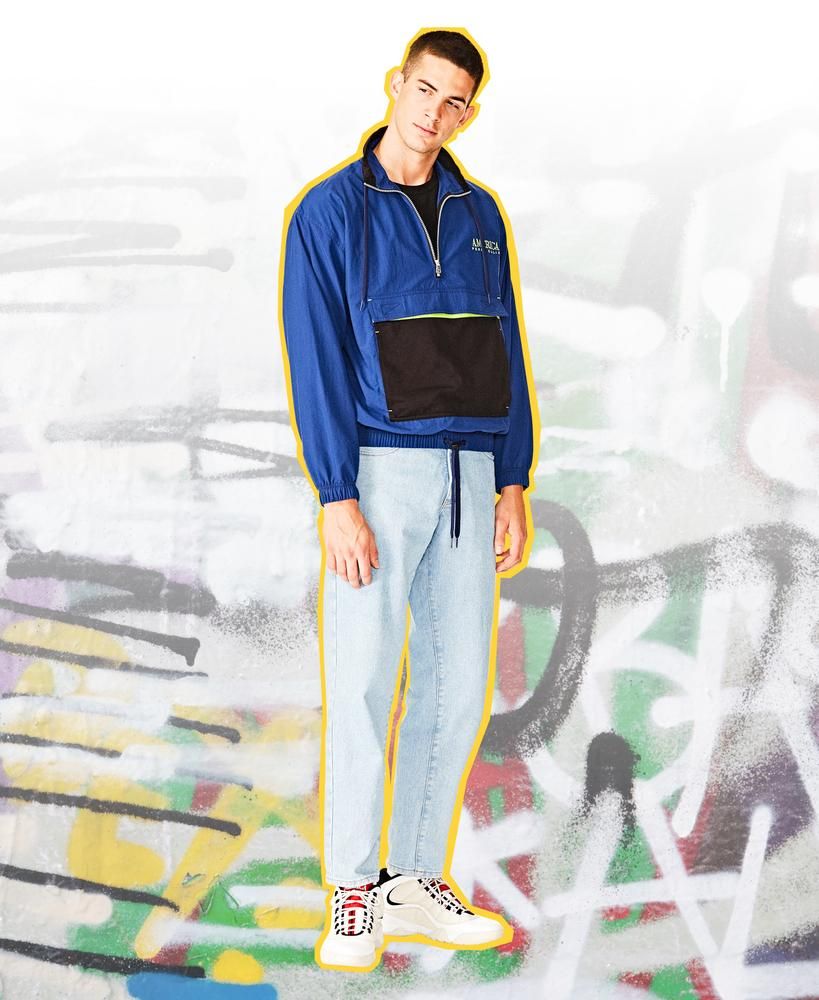 Perry Ellis is one of many brands who have recently released archival clothing collections.

Patrick Buhse, 27, the marketing manager of a Harley Davidson showroom on Long Island, called these buyers a “movement.” Inspired by photos he’d seen online of Snoop Dogg and Michael Jackson wearing Tommy Hilfiger in the ’90s, Mr. Buhse himself bought basketball sneakers and a long-sleeved polo from the Kith collection. For older millennials, this thirst for retro designs is wistful: “As a kid who grew up in the ‘90s, [the Kith collection] brought back a little nostalgia [for] my first bottle of cologne by none other than Tommy Hilfiger,” wrote Reagan Lee, 35, a web designer in Sydney, over email.

Given the graphic impact of much of the clothing, this nostalgia trip is gaining speed on visuals-happy social media platforms. A Guess T-shirt noisily striped in red and white or a Perry Ellis pullover slapped with a neon-green logo assert a loud aesthetic that stands out in the age of constant documentation. “Instagram is now the most important visual medium for fashion and as a result the industry has honed in on streetwear’s graphics and logos as transmittable memes, seeing a huge revival in 90s logomania,” reads a report (due to be published in November) by Lyst, a website that tracks search activity of fashion brands across the internet. Lyst reported that searches for Tommy Hilfiger jumped up 34% year-on-year, Fila searches soared 202% year-on-year and searches for Gap and Nautica have begun to rise since July. Searches for Perry Ellis are flat, but its new archive collection could move the needle.

Fila’s conspicuous shoes, like the “Disruptor II,” a lumbering lugged-sole sneaker from the ’90s that was reissued in 2016, have allowed the brand to introduce itself to a much younger consumer, according to Mark Eggert, the SVP of footwear at Fila North America, who said the brand wants to offer a unique look, “especially with the advent of social media.”

Some of this social media buzz is organic, but often it is orchestrated. Armaand Mangat, 26, who helps manage his family’s chain of gas stations in Ashburn, Va., first saw the Tommy Hilfiger Kith collection in an Instagram photo posted by 33-year-old racecar driver and Tommy Hilfiger spokesperson Lewis Hamilton. “They’re working with the right influencers,” said Mr. Mangat, who subsequently purchased a T-shirt from the hyped-up reissue collection.

If Lyst’s data is any indication, Fila has benefited from persuading top models with big Instagram followings such as Kendall Jenner, Romee Strijd and Emily Ratajkowski to wear its shoes. “We recognize that [Instagram] is where the kid is–that’s where they’re getting their information, they’re on the phone–so it was very critical for us to be there,” said Mr. Eggert. Similarly, Guess Jeans and Nautica have recently partnered with popular rappers A$AP Rocky and Lil Yachty (the self-professed “King of the Teens”) respectively on limited, vintage-tinged collections. “I didn’t know what Nautica was until Lil Yachty,” admitted Mr. Hadley, the Liverpool student. Today, he counts it, along with Guess, among his favorite brands.

For the launch of its retro collection, Perry Ellis partnered with Hypebeast, the popular streetwear site, for a series of ads and sponsored posts. The decision to market it with the site was “natural,” said designer Mr. Maccari. “You think about the young kids on my team, these are the places they look. They look to Instagram, they look to Hypebeast.” What’s old is new again, as long as you can find it on your iPhone.