You are here: Home  /  COMPUTERS  /  Alleged hacker who avoided extradition to US seeks return of computers 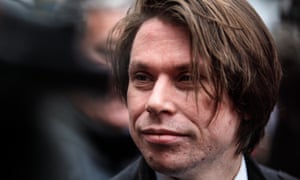 A computer activist who successfully resisted attempts to extradite him to the US over alleged hacking has applied for the return of his confiscated computers, after the National Crime Agency confirmed he is still under investigation.

Lauri Love, 34, requested several computers and the data on them be handed back.

His equipment was taken when he was first arrested under the Computer Misuse Act 1990 by the NCA at his home in Suffolk in 2013. He has continued to protest his innocence and has not been charged.

Love applied at Hendon magistrates court in north London for his possessions to be returned.

Love’s move to recover his computers follows a failed attempt last year to extradite him to the US to face prosecution for allegedly breaking into government agencies such as the Federal Reserve, the army, the US Department of Defense, Nasa and the FBI in a spate of online attacks in 2012 and 2013.

In the extradition hearing, the lord chief justice, Lord Burnett, and Mr Justice Ouseley said it would be “oppressive” to send him for trial in US courts because Love has Asperger syndrome and other health difficulties. He might either have been rendered suicidal or medically unfit to enter a plea, the judges concluded.

The high court also said: “It would not be oppressive to prosecute Mr Love in England for the offences alleged against him. Far from it. Much of Mr Love’s argument was based on the contention that this is indeed where he should be prosecuted.”

One year on, Love has not been charged with any computer hacking offences. He denies wrongdoing.

She did, however, seek confirmation from the counsel for the NCA and allow reporting of the fact its investigation of Love is continuing.

The judge reserved judgment to 19 February at Westminster magistrates court.