You are here: Home  /  ELECTRONICS  /  Android P Might Just Be the Beginning of the End of Android Fragmentation
ELECTRONICS It’s been 10 years since Android was first launched and Google has come a long way in tweaking and improving the functionality of the operating system, to a point where its the most dominant platform today. From phones to televisions to smartwatches, we are constantly interacting with the OS in some form or the other. At Google I/O 2018, Dave Burke, VP of Engineering for Android, and Sameer Samat, VP of Product Management for Android and Google Play, gave the audiences a peak at some of the new features headed to its next big instalment, which is simply known as Android P for now.

While it is still in the finishing stages, Google has released the public beta which you can now download and try out on a Pixel phone as well as, for the first time, on select OEM phones too. There are big changes coming to Android P, both on the UI side as well as system level changes, which promise things like better battery life, a ’new’ form of navigation, and a much deeper focus on making sure the wellbeing of the user isn’t impacted in a negative way.

We’ve been testing out Android P ever since Google released its first Developer Preview back in March, but the recent new features also bring up a lot of questions about Google’s strategy with Android. We caught up with Burke and Samat to get some answers to our burning questions around Android P.

We begin with the new gesture support that’s been added to Android’s navigation system. This isn’t enabled by default, so you can opt to use it or stick with the traditional ‘three-button’ layout. With the traditional on-screen navigation system (the triangle, circle and square), which Burke now refers to as “hieroglyphics,” Google found that many people didn’t quite understand how to use the controls, especially the ‘recent apps’ button.

With navigation gestures or Overview as Google calls it, Burke says, “we’re very careful to keep the home button,” a reference to Apple’s iPhone X (Review), which famously does not have a home button. But more importantly, what took Google so long to bring this feature to Android? Google’s blog postattributes the introduction of these gestures to the ever growing sizes of smartphone displays. However, we’ve had large phone display for many years now. Remember Google’s own Nexus 6 and Nexus 6P? To many, it seems like a knee-jerk reaction to what the competition is offering. But, Burke says, the team has been “increasing gestures all the time” and that, “it’s something [Google] has been working on before iPhone X.” 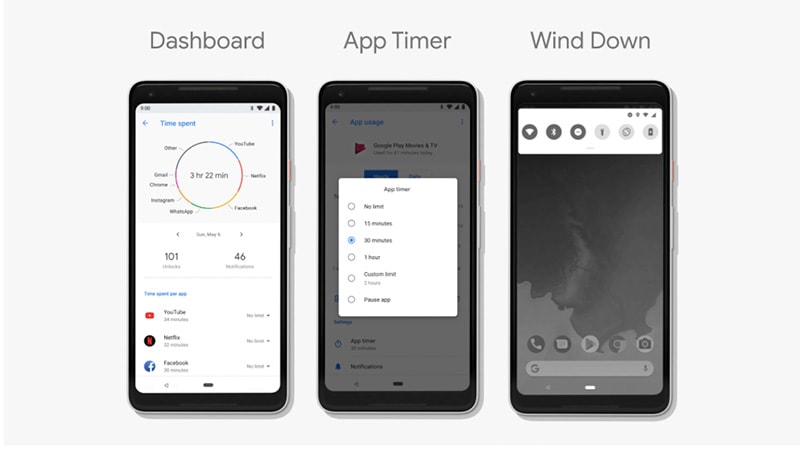 One cool thing about the multitasking system in Android P is that you can actually interact with the opened apps (shown as cards now, similar to iOS, MIUI and many other custom ROMs), which no one else offers. This means, when you’re in the multitasking menu, you can directly copy text from the opened cards, without actually switching apps. What’s more, Android P will also offers app predictions depending on what you select. For example, if you select text, you might get a prompt for Google Docs, which would automatically open a document with the text already pasted in.

Dashboard is another new feature which gives the user an overview of their app-usage habits and is part of Google’s well-being push, to ensure its users spend a healthy amount of time on their phones. App Timer is interesting as it lets you set time limits on apps to prevent excessive usage. So once the clock runs out, you’ll be nudged to stop using the app, and it will be greyed out.

This feature isn’t present in the first public beta, but considering this is a manual process, we wonder how many people would actually use it? We feel an average user wouldn’t care about the amount of time he or she spends on an app, so it would make more sense if this process was automated.

For instance, it would be great if AI could automatically detect the amount of time you’re using the app and then nudge you to stop using it, which you could accept or ignore. A Google representative clarified that since this feature is still not finalised, the workings of it could change in the final release.

The Adaptive Brightness feature is said to use machine learning now, which learns your habits of adjusting the brightness level and then will automatically do that for you, rather than just rely on the ambient light sensor. This is very cool update and a much needed one, since we’ve found that brightness adjustments made using just the ambient light sensor on many phones aren’t particularly accurate to our preferences. The ability to learn your habits in order to adjust the light level is a welcomed addition.

Chat is another big focus for Google, as it desperately tries yet another attempt at creating a popular chat platform, this time, to take on the likes of Apple’s iMessage. Its new Chat app will be based on the RCS platform, an evolution of SMS, which involves creating partnerships local mobile operators to use this feature.

Google has been in talks with carriers in the US for a while now but no word on how this is progressing in India. As we understand this, when this eventually rolls out, users would be able to take advantage of the rich multimedia features of RCS if the person they are texting also has an RCS compatible phone and network. Else, it should default to regular SMS messaging.

Another first for Google is releasing a preview build of Android for phones outside of the Pixel family. Right now, Google has announced seven devices from different OEMs that are part of the beta program, which means you can get the latest build of P running on a Nokia 7 Plus (Review) or even the upcoming OnePlus 6. It is a little strange to see the LG G7 ThinQ absent from this list, especially since Google has worked closely with LG on this release for adding a dedicated button for Google Assistant. We were unable to get a comment about this.

Another thing you have to wonder about is whether these hand-picked devices will get the final version of Android P on day one? This has been nearly a decade long dream for Android users who aren’t Nexus or Pixel owners. From what we gather, the timeliness of the rollout will ultimately depend on the OEMs. As for the reason why these specific handsets were chosen for its beta program, it seems like this isn’t entirely Google’s decision, but could have more to do with the recent partnership forged between Qualcomm and Google. 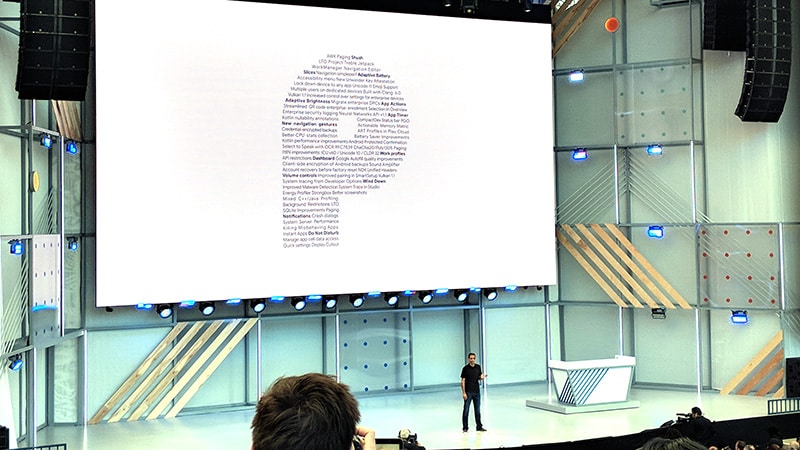 The chip maker is prioritising Project Treble for three particular SoCs right now – the Snapdragon 845, Snapdragon 660 and the Snapdragon 636 – which are seen powering the chosen seven. Burke states that Project Treble is also “playing out exactly as we expected.” He adds, “You were never going to see a benefit last year… you [will] start seeing the benefits now.”

Finally, there’s the question about Android P (Go edition), which is also on track according to Samat and should be launching around the time P arrives later this year. Regarding the rollout strategy, Google didn’t have anything to comment on this but from what we understand, that would still be up to the OEMs, since Go edition phones aren’t part of the Android One program, so Google doesn’t have the control to push the updates directly.

There’s still plenty of time before Google serves us the finished version of P, which incidentally, is yet to be christened. Samat says they are open to suggestions, so what do you guys think Android P should be named?

Tag Android Be Beginning End Fragmentation just Might of P The