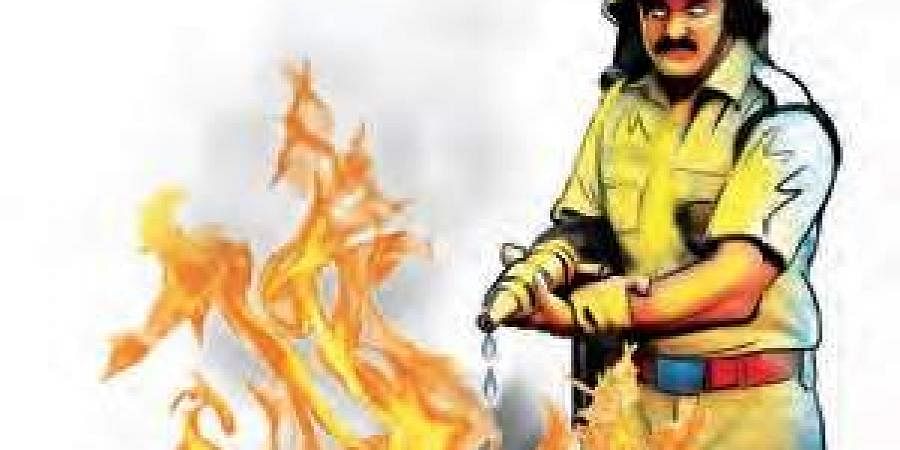 THIRUVANANTHAPURAM: A major fire broke out at the Indian Overseas Bank branch located at Ulloor here on Saturday morning, triggering panic among local shop owners and residents. The fire gutted many important files, electronic equipment, computers and wooden furniture in the office. No casualties have been reported as the branch had declared a holiday due to a nationwide strike.

The fire was triggered at the ground floor of the building following a suspected short circuit. Bank officials have estimated the losses at Rs 40 to 50 lakh. The timely intervention of Fire and Rescue Services officers helped in salvaging some of the merchandise.

The fire broke out at about 7.40 in the morning. The security guard alerted the fire and rescue team after he noticed thick smoke billowing out through the ventilation. Immediately, two fire tenders from Chenkalchoola fire station were rushed to the spot and pressed into service. The fire was contained within an hour before it could spread to other floors and buildings.

“When we reached, the fire had almost gutted the office. The fire spread very fast. However, the cash was not stored on the ground floor and was on the first floor. But the fire affected many computers and important files. We managed to douse the fire and the situation is under control,” said a fireman.

Bank officials said 80 per cent of the bank’s material including counters, electrical appliances and computers were gutted in the fire. “The items stored in the locker room including documents and cash are safe. But we estimate a huge loss and many valuable documents were charred in the fire,” an official added.

Meanwhile, allegations have poured in about a power overload by bank officials which the bank has denied.