BURDETT, N.Y. — When Thomas and Linda Craig first saw La Bourgade On Seneca, it was love at first sight.

The Craigs had spent more than three decades living in Los Angeles before returning to central New York to care for aging parents. When it was time to move on from the large family house in Seneca Falls, the couple initially considered moving to New England.

But after touring La Bourgade’s small, newly constructed rental homes late last summer, the Craigs immediately decided they wanted to be part of the picturesque community that overlooks Seneca Lake.

“One look and we fell in love with it,” Linda Craig said. “It was instant love.”

Located on the eastern shore of Seneca Lake in Schuyler County, La Bourgade On Seneca is a growing community of small, year-round rental houses designed and built by Schickel Construction Co. of Ithaca.

More: Tiny homes, big problems: Where can you park your home-on-wheels?

More: Tiny houses are trendy — unless they go up next door

When complete in 2019,  La Bourgade will have 40 energy-efficient cottage homes ranging in size from 700 to 1,300 square feet, as well as the larger “Meeting House,” which serves as a social center for residents.

The development and those who desire to live there are part of a growing interest in downsized housing and clustered housing, owner Bruno Schickel said.

While the median size of new single-family homes continues to increase — 2,422 square feet in 2016, compared to 1,660 square feet in 1973, according to census data  — the financial crisis of 2008 inspired both buyers and renters to seek more affordable housing options. They include so-called tiny houses, micro apartment units, and intentional communities.

A more modest real estate footprint, according to online tiny house enthusiasts, can appeal to everyone from debt-saddled graduates and recent retirees to those who simply want to leave less of an environmental impact.

Alternative housing options are not new to the upstate New York region. EcoVillage Ithaca, which was founded more than two decades ago, has grown into three co-housing neighborhoods with over 200 homeowners and renters dedicated to sustainability and collective living. The Aurora Street Pocket Neighborhood, also in Ithaca, is an “urban ecovillage” which features net zero energy buildings clustered on cooperatively-owned parcels.

In Brooktondale, the colorful Boiceville Cottages has grown into a thriving community of 140 colorful small rental houses, plus a meeting house and two dog parks. Also owned by Schickel, Boiceville Cottages’ design was inspired by a children’s book and attracts a wide demographic of tenants, from college students to young families to retirees.

“People move to Boiceville for the sense of community,” Schickel said. 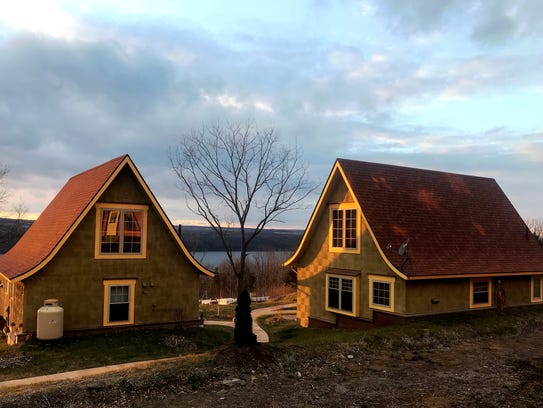 For his latest project, La Bourgade On Seneca, Schickel drew inspiration from the centuries-old hillside villages of France and Italy: “La Bourgade” means “a village of scattered dwellings” in French.

“For a long time, I wanted to build a little European hillside village. That was image I had in my head,” Schickel said. “I wanted to have something on a slope, so I looked for a piece of land that was steep enough to create the ability for the people above to be able to see over the people below.”

More: Tiny homes aren’t traditional, and neither is their financing

Schickel found the land for his European-style village among the vineyards of Seneca Lake, a region known for its world-class wineries, booming distilleries and spectacular sunsets.

Grouped in clusters of three sloping down towards the water, all the cottage homes have views of the lake. The exteriors are painted in hues of yellow, peach and green; Schickel formulates the colors himself.

“I want people driving by to slam the brakes on,” Schickel said of La Bourgade’s design. “If you can create something that brings a smile to people’s face and creates an emotional reaction, then you really have something that people want.”

La Bourgade’s cottages are more spacious than “tiny houses,” which usually measure under 500 square feet. The nine finished units include the 900-square-foot “Classic Cottage,” which has two bedrooms plus a loft, and the “Spacious Cottage,” a 1,000-square-foot home with two bedrooms and loft, plus a specially designed dormer area.

Rent for the Classic Cottage is listed at $1,495 per month and the Spacious Cottage can be rented for $1,725 per month, with leases of 12 or 24 months. Water is included in the rent, with the tenant paying for electric and gas.

The energy-efficient cottages are heated by propane-fired, cast-iron imitation wood stoves and are “very well insulated,” Schickel said. Each unit has an on-demand hot water heater, dual-flush toilet and full-size washer and dryer. The kitchens are equipped with a dishwasher, microwave and modern stainless steel appliances.

“There’s not a lot of synthetic materials here,” Schickel said.

La Bourgade’s largest building is the Meeting House. With a bell tower rising above the landscape and a picture window looking out onto the lake, the large, airy building is designed to be the social center of the growing La Bourgade community. It contains a 24-hour exercise room, full kitchen and comfortable couches meant to encourage residents to organize social gatherings. 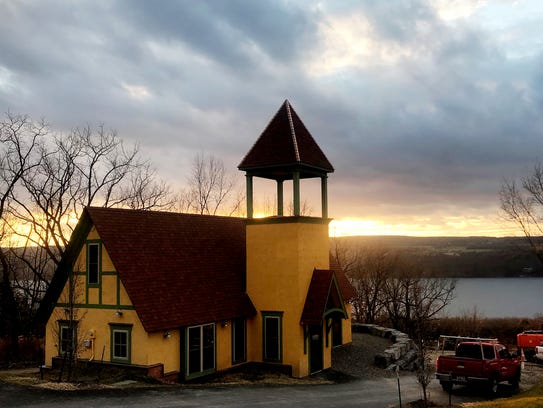 The neighborhood is pet-friendly and a dog park is in the works. Each house also has a small yard for gardening.

The Craigs, who moved into their new home in October and are among the first tenants, said they never considered living in a small community until they saw La Bourgade.

“We got here and it was perfect,” Thomas Craig said. “There was something different about it, but not so different that it was off-putting.”

Craig commutes to work in Auburn, but Schickel said that the community has been attracting professionals, families and recent retirees from Ithaca, Elmira and Corning, all within a 45-minute drive of La Bourgade and the surrounding scenic landscape.