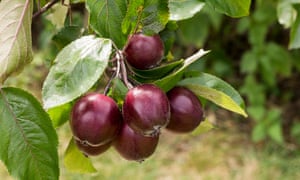 As an urban gardener with a tiny plot to play with, poring over the fruit tree sections of the gardening catalogues can verge on heartbreaking. But if you long to fit more in than the textbooks recommend, a novel technique adopted from commercial agriculture called high-density planting might be your salvation.

The idea is simple: by planting two, three or even four trees in one large hole you can fit loads more into tiny spaces. Although the production per tree is reduced due to the competition, the yield and potential variety per square metre is greatly enhanced. For home growers this not only means you can extend the season by growing early, middle and late-ripening cultivars altogether, it can also eliminate problems with pollination if one of the varieties you choose to grow won’t fruit without a nearby compatible partner.

You can even pair up self-fertile trees of different species, such as a Victoria plum and a Morello cherry, into space where you might think only one tree could prosper. The reduced yield per tree also means you are never lumbered with great gluts of a single crop, but a steadier, more varied harvest across a longer period.

All you need to do to get started is pick two or three young saplings of the same age, all grafted on to dwarfing rootstocks, and plant them in the same large hole, with their trunks between 40cm and 1m apart. Backfill the hole with the existing soil, making sure to firm it in with your heel to exclude air pockets, and then water in well.

Prune out the centre of the joint canopy where the trees meet to create an open, airy centre, only allowing growth on branches that face outwards. Aside from this quick once-over to maintain the shape, and a little extra irrigation and feeding, your mini grove will provide no extra work and some great benefits.

Cherry ‘Merton Glory’ and ‘Penny’ pair a sweet, white form with a deep, dark, late-fruiting one to round off the season with a bang.

Pluots are a delicious cross between plums and apricots. Try planting pluot ‘Flavour King’ and plum ‘Mirabelle’. Pluots aren’t self-fertile, but with a playmate such as ‘Mirabelle’, pollination shouldn’t be an issue.