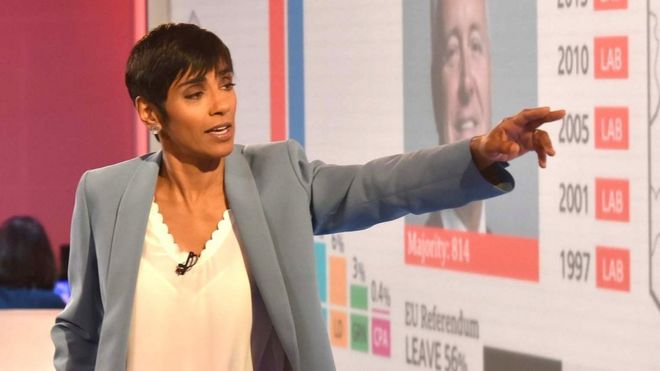 For the first time, BBC News published a news story for every constituency that declared election results overnight – all written by a computer.

It was the BBC’s biggest test of machine-generated journalism so far.

Each of nearly 700 articles – most in English but 40 of them in Welsh – was checked by a human editor before publication.

The head of the project said the tech was designed to enhance the service provided rather than to replace humans.

“This is about doing journalism that we cannot do with human beings at the moment,” said Robert McKenzie, editor of BBC News Labs.

“Using machine assistance, we generated a story for every single constituency that declared last night with the exception of the one that hasn’t finished counting yet. That would never have been possible [using humans].”

The technology can quickly produce stories focused on numbers, such as football scores, company financial reports – and general election results.

Overnight, the BBC generated 649 news articles in English – one constituency has yet to declare its results – and 40 in Welsh.

Vauxhall: as told by machine

Florence Eshalomi has been elected MP for Vauxhall, meaning that the Labour Party holds the seat with a decreased majority.

The new MP beat Liberal Democrat Sarah Lewis by 19,612 votes. This was fewer than Kate Hoey’s 20,250-vote majority in the 2017 general election.

Voter turnout was down by 3.5 percentage points since the last general election.

More than 56,000 people, 63.5% of those eligible to vote, went to polling stations across the area on Thursday, in the first December general election since 1923.

Three of the six candidates, Jacqueline Bond (Green), Andrew McGuinness (The Brexit Party) and Salah Faissal (independent) lost their £500 deposits after failing to win 5% of the vote.

Mr McKenzie said the articles reflected a “BBC style” because the choice of phrases could be programmed in advance by BBC writers.

“As a journalist, you try to think of every conceivable permutation of a story in advance,” he said.

“Then you write a template. The machine selects particular phrases or particular words in response to precise pieces of data. So you can write everything if you want to, in ‘house style’.”

Journalists at BBC offices in Belfast, Cardiff, Glasgow and London checked the articles before publication.

Mr McKenzie said one limitation of the system was that it could not add analysis to articles.

So, in a small number of significant seats such as the Kensington constituency, human journalists added additional context.

“This clearly only works on stories that are grounded in data. It is not a technology that allows you to do any kind of analysis,” said Mr McKenzie.

“None of the stories have any quotations in, none of them have any analysis of what happened or what the significance is. It is purely a written version of what has happened based on the data. So that’s quite a big downside in terms of quality of journalism.”

However, Mr McKenzie said the BBC was still in the “very early stages of understanding what audiences want from the technology”.