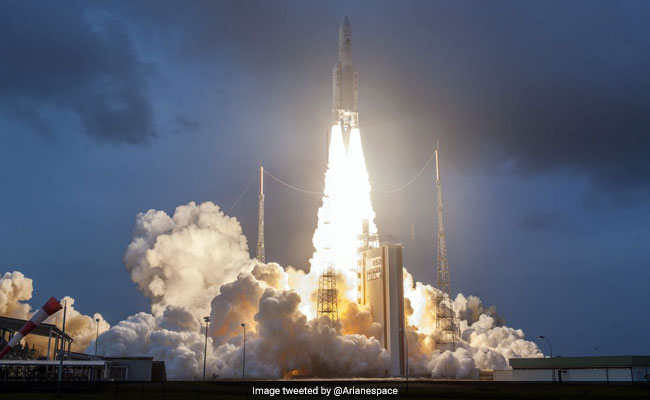 Indian Space Research Organisation or ISRO’s GSAT-11 satellite also called the “Big Bird ” was successfully launched into space today from the French space port of Kourou in South America. The satellite, launched at 2.07 am (IST), will help provide satellite-based internet to remote places where cable-based internet cannot reach. The satellite, weighing 5,854 kg, is the heaviest Indian-made equipment that the agency put into its orbit.

This launch was the second attempt after ISRO’s first bid failed in May earlier this year and was placed into space on its 102 nd flight, the Ariane 5 rocket. According to ISRO, the satellite is healthy after the launch.

“GSAT-11 is the next generation high throughput communication satellite that will play a vital role in providing broadband services across the country. It will also provide a platform to demonstrate new generation applications,” Dr K Sivan, ISRO chief said.

The “Big Bird” has cost about Rs. 600 crore. The ariane-5 heavyweight rocket was hired from Arianespace by ISRO. The satellite is expected to have a life span of 15 years.

The satellite internet, which the GSAT-11 will help to provide, will aid in giving internet connectivity in flights in India.

The GSAT-11 is equivalent to the combined power of almost all communications satellites sent into orbit by India. A communications specialist told NDTV that the satellite is like a constellation of 30 classical orbiting satellites.

India has hired the French Ariane-5 rocket as it can heavy payload into orbit. India’s own geosynchronous satellite launch vehicle MK iii or GSLV MK iii can haul satellites that weighs upto 4 tons.

Along with its three siblings, GSAT-19, GSAT-29 and GSAT-20, the satellite will be a “game changer for providing internet access and data communications for India and will aid the digital India program. Dr Sivan adds.