You are here: Home  /  HOME & GARDEN  /  After Knee or Hip Replacement, No Place Like Home
HOME & GARDEN

After Knee or Hip Replacement, No Place Like Home 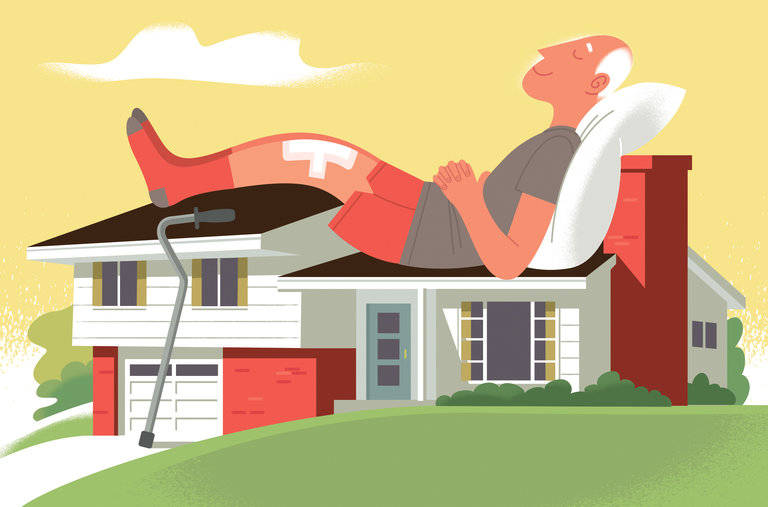 Growing numbers of Americans are outliving their joints. More than a million operations are done annually to replace worn-out knees and hips, and that number is expected to skyrocket in the coming decades as the population ages.

As someone who has had both knees replaced, I can attest to the vast improvement in quality of life the surgery bestowed. I can walk and cycle for miles and swim daily without pain, and I can sit through operas, plays and concerts without stiffness.

I can also underscore the general futility of some popular efforts to postpone needed joint replacements, including injections of hyaluronic acid and corticosteroids, braces, shoe inserts and opioid painkillers like OxyContin and fentanyl, none of which are recommended by the American Academy of Orthopaedic Surgeons.

In a study published earlier this year in The Journal of Arthroplasty, medical researchers at the University of Iowa and the University of Texas reported that patients with knee arthritis who use treatments before surgery that the academy does not recommend may be increasing costs by 45 percent. (The academy guidelines strongly recommend only three of the eight preoperative treatments studied — physical therapy, nonsteroidal anti-inflammatory drugs and the painkiller tramadol.)

Ultimately, many, if not most, patients with painful bone-on-bone arthritis opt for a joint replacement. But as the number of these replacements grows (the rate nearly doubled from 2000 to 2010, when an estimated 693,400 total knee replacements were performed), so does the cost to the health care system, prompting some experts to look for ways to minimize the expense of the procedures without compromising the well-being of patients who need them. The latest research — on the value of inpatient rehabilitation for large numbers of patients — offers a promising route to less costly care with no loss of benefit.

It may surprise many to learn that, even if joint replacement patients live alone, the overwhelming majority recover equally well and may experience fewer complications if they go home directly from the hospital and get outpatient rehabilitation instead of spending days or weeks in a costly rehab facility.

Based on the findings of recent well-designed studies, Dr. Javad Parvizi, chairman of research in orthopedics at Thomas Jefferson University in Philadelphia, maintains that “we need to re-examine who, if anyone, should go to a rehab facility after joint replacement.”

Traditionally, Dr. Parvizi said, patients who live alone, those who have both knees or both hips replaced simultaneously, and those with a serious underlying medical condition are automatically sent to a rehab facility after discharge from the hospital. And to be sure, a small percentage of these patients — perhaps those who have both hips or, like me, both knees replaced at once — may benefit from inpatient rehab.

However, according to the findings of a new Australian study, patients who live alone and can perform a home exercise program recover just as well with home-based rehab as patients who spend 10 days in a rehab facility. In the study, 81 knee replacement patients were randomly selected to receive 10 days of inpatient rehabilitation, followed by an eight-week home-based program; 84 patients got only the home-based program, and another 87 patients served as a nonrandomized observation group that did only home-based rehab.

Six months after their surgery, there was no difference in mobility, pain, function or quality of life between those who got inpatient rehab and either of the two groups that got outpatient rehab.

Another study, by Dr. Parvizi’s team, involved 769 patients who underwent either a knee or hip replacement for advanced arthritis. Only 36 of these patients were discharged from the hospital to a rehabilitation facility; the rest, including 138 patients who lived alone, returned home to receive outpatient rehab.

Based on an assessment of the patients’ function, pain relief and personal satisfaction three months after their surgery, the team concluded, “Patients living alone can expect a safe recovery, equivalent to those not living alone, when discharged directly home after total joint arthroplasty.”

Even if patients who lived alone stayed in the hospital an extra day, and some of them got home health services in addition to home-based rehab, the cost was much less than if they had been routinely discharged to a rehab facility, they reported.

Dr. William J. Hozack, an orthopedic surgeon at the Sidney Kimmel Medical College at Thomas Jefferson University, who described the study at the annual meeting of the American Academy of Orthopaedic Surgeons last month, said, “We found that patients living alone were able to safely recover without any increase in the rate of complications. Even more strikingly, patients were generally happy and content being in the comfort of their own home during recovery.”

Dr. Parvizi noted, “Half or more of the cost of total joint replacements is incurred in the postoperative period. Outpatient rehab is much less expensive.”

Without inpatient rehab, and even with an extra day in the hospital before going home, the cost per patient is reduced by more than $10,000, the researchers reported. Their conclusion: “The substantial post-discharge costs of inpatient rehabilitation, sixfold greater than for home discharge, cannot be ignored.”

Costs aside, patients who go home directly may be less likely to experience what doctors call “adverse events” – complications like infections, blood clots or worse.

Inpatient rehab is not the idyllic experience many patients expect. An analysis of complications experienced by a nationally representative sample of Medicare patients, conducted in March 2012 by the Office of the Inspector General, found that 29 percent suffered adverse events during their stay in rehab facilities, a rate similar to that incurred in hospitals (27 percent) and in skilled nursing facilities (33 percent).

Doctors who reviewed the adverse events that occurred during inpatient rehab determined that nearly half of them were “clearly or likely preventable,” most often because of “substandard treatment, inadequate patient monitoring, and failure to provide needed treatment.”

Dr. Parvizi said that when patients who live alone are prepared before surgery for going home directly from the hospital, they are much more likely to do well with home-based rehab. “If patients are told they will be going home, they can make preparations beforehand for needed support,” he said. “But if they think they will be going to inpatient rehab, they expect that and are not prepared to manage alone.”

Tag after Hip Home Knee like' No or place Replacement Ordering Conservatory Shade Sail Blinds: When Should I Do It?