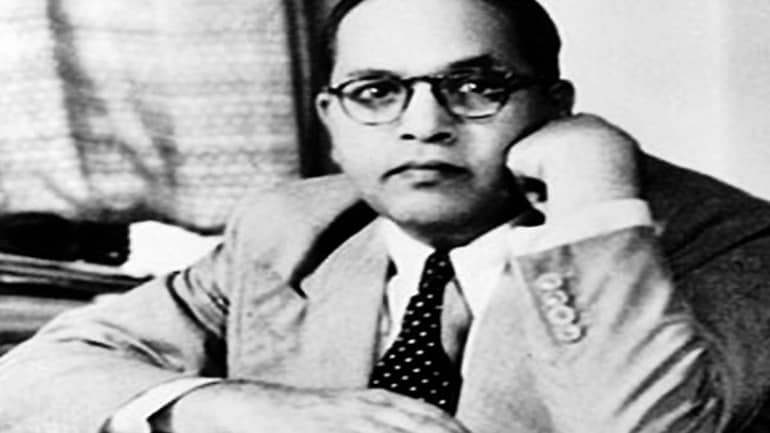 The author of the book ‘Ambedkar’, is a member of The Planning Commission, an establishment totally or almost totally lacking creativity, innovation or imagination. Professor Jadhav is a distinguished exception. He studied in the United States, obtaining PhD in Economics. The last worthwhile book on Ambedkar was written by Dr. Dhananjay Keer. It was published in 1954. Dr. B.R. Ambedkar was arguably among the most brilliant Indian intellectuals of the 20th century. His life is a triumph of character over circumstances.

He,for the first thirty five years of his life was subjected to the most appalling humiliations, brutal discrimination and indignities for being an untouchable. The dice was loaded against him right from his birth.

He was born in a Mahar family on 14 April 1893. He died at the age of fifty six on 6th December 1956. He made it to the Elphiston College in Bombay. He could neither buy books nor clothes. He was lent books by one of his professors who also gave him clothes.

At the age of 22, he was given scholarship by the enlightened Gaikward of Baroda, which enable him to join Columbia University in New York. He passed his M.A and obtained a PhD with high distinction. Similarly he did exceptionally at the London School of Economics. THE LOT of the untouchables in India were worse then that of Negros (Blacks) in America.

This was a blot on Hinduism which outraged Gandhiji. He called them Harijans, now referred to as Dalits. Ambedkar considered Gandhi’s approach to the problem of untouchability and untouchables both flawed and wooly. The two clashed at the second Round Table Conference in 1931. Ambedkar denigrated Gandhi in sharp language. “Unfortunately, the Congress chose Mr. Gandhi as its representative.

the nineteen eighties that Ambedkar attained legendary status. He is today the second most popular after Gandhi but his dream of a caste-free India remains unfulfilled.

A worse person could not have been chosen to guide India’s destiny. As a unifying force he was failure. Mr. Gandhi presents him as a man of humility. But his behavior at the Round Table Conference showed that in the flush of victory Mr. Gandhi could be petty minded.” Gandhi petty minded!! Well, well. Throughout their lives, the Mahatma and the Mahar could never see eye to eye on the vital issue of caste/ untouchability. The year 1942 was a defining year for both. On July 2, 1942 Dr. Ambedkar was appointed Labour minister in the Executive Council (cabinet of the Viceroy). He thus became a high profile member of the Raj establishment. It was an example of a good man fallen among thieves. On 8th August 1942 Gandhiji launched the Quit India movement at Bombay. The next day he and his colleagues in the Congress were arrested. On 10th February 1943 Gandhi went on a three week fast in the Agha Khan Palace Prison in Poona. He almost died. Three Indians of the Executive Council resigned- M.S. Aney, N.R. Sarkar and Homi Mode against the Viceroy’s obduracy about realising Gandhi.

Dr. Ambedkar did not. Not only that. In June 1945 his seminal book, “What Congress and Gandhi Have Done to the Untouchables” came out. It is a well argued, well prepared obsessional book. On 15th August 1947, Jawaharlal Nehru included Ambedkar as Law Minister in his cabinet. Both Gandhiji and Sardar Patel supported Ambedkar’s inclusion. Nehru and Patel appointed him Chairman of the Drafting Committee of the Constitution.

Ambedkar’s stamp on the Constitution is all too clear. It was an achievement of the highest order.

In 1951 Dr. Ambedkar resigned from Nehru’s cabinet over differences on the Hindu Code Bill. In 1952 he lost an election for the Lok Sabha from Bombay to a Congress Candidate by 14000 votes. He remained a member of the Rajya Sabha till his death. Dr. Ambedkar, a radical and a thinker gave his people hope, awakening and confidence. His dream has been only partially fulfilled. It was only in the nineteen eighties that he attained legendary status. He is today the second most popular after Gandhi.

In superb prose, he once wrote about democracy, “Constitutional morality is not a natural instinct. It has to be cultivated. Democracy in India is only the top dressing on main soil, which essentially is undemocratic.” Dr. Jadhav’s book has made me think and think deeply about Dr. Ambedkar’s life and achievement.