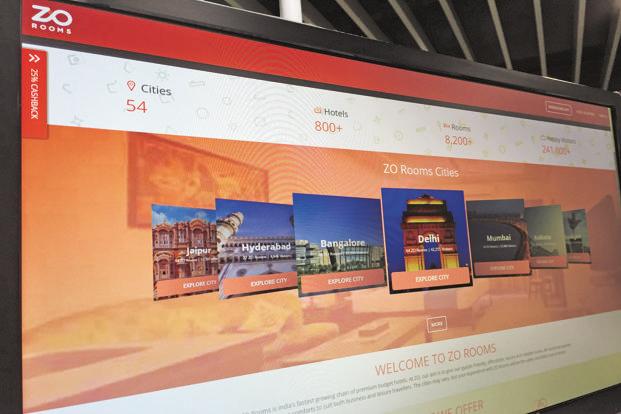 SoftBank, which took part in a $100 million round of funding in Oyo Rooms last year, announced the acquisition in its earnings report on Wednesday without specifying the deal value.

According to two people familiar with the deal, Oyo Rooms, run by Oravel Stays Pvt. Ltd, bought Zo Rooms in an all-stock deal after nearly three months of negotiations.

The founders of Zostel Hospitality Pvt. Ltd, which runs Zo Rooms, and investors will get a 7% stake in the combined entity, the people said, requesting anonymity.

While the Zo founders will get close to a 2.5% stake, the rest will be held by Tiger Global Management LLC, Orios Venture Partners, angel investor Zishaan Hayath and Mato Peric, ex-managing director at Rocket Internet, among others.

The deal is likely to be signed in the next 15-20 days, the people cited above said.

The transaction comes amid a slowdown in start-up funding as investors are becoming increasingly risk-averse and unwilling to fund start-ups that aren’t market leaders in their respective sectors.

The acquisition comes after Zostel Hospitality failed to convince investors, including existing ones, to pump in more money. Zo Rooms raised roughly $35 million from Tiger Global and Orios Management in 2005.

Oyo Rooms is on a firmer footing, having raised $100 million from SoftBank and other investors in August.

“This was a much needed consolidation in the hyper competitive space of budget hotel accommodation. But the bigger challenge will be to see how the company is going to set up a proper mechanism to provide consistency of service and the whole diligence process of getting properties on board,” said Rohit Bhatiani, director, Deloitte Touche Tohmatsu India LLP, a consulting firm.

Oyo Rooms reported a 34-fold increase from the previous year with used rooms nights rising to 895,000 in the October-December quarter of 2015, SoftBank’s earnings statement said.

The statement added that the period also saw the “acquisition of Zo Rooms”, without giving details.

Mint reported in December that Oyo was in talks to buy Zo Rooms.

Zo Rooms had close to 300 employees and 20,000 listed properties across 30 cities. However, not all will be absorbed by Oyo, one of the people cited above said.

Oyo has been operating in more than 165 Indian cities through close to 4,500 hotels. Last month, it started operations in Malaysia, the company’s first venture outside its home market.

With the acquisition of Zo Rooms, Oyo becomes a clear market leader in the budget accommodation segment which recently saw the entry of large online travel firms, including MakeMyTrip, Yatra Online Pvt. Ltd and Goibibo.

The revenue potential of the hotel aggregator websites is still remains unclear given their relatively short existence. But the entry of online travel agents, with their large customer bases, is likely to intensify competition in an unproven business.

Still, the market potential is large, and analysts have frequently said that the supply of hotel rooms in India is way below demand.

Occupancy rates inevitably tend to remain low, partly as these brands are new.

Despite being relatively well-funded, budget hotels have failed to deliver meaningful revenues so far, investors say.