You are here: Home  /  NEWS  /  Simpl Is an Anti-Wallet That Brings the Buy-Now, Pay-Later Model Online
NEWS

Simpl Is an Anti-Wallet That Brings the Buy-Now, Pay-Later Model Online 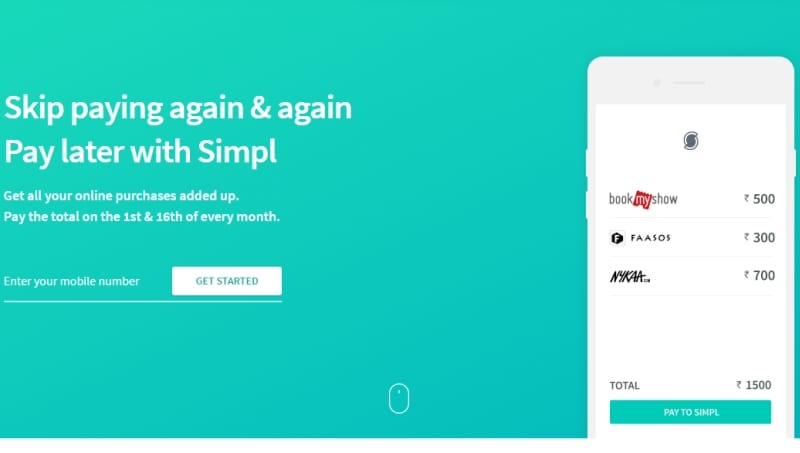 HIGHLIGHTS
With Simpl, you can buy items online, and pay the bill later
The consolidated bill is due on the 1st and 16th of each month
This way you don’t need to keep making multiple payments online
Thanks to the demonetisation of Rs. 500 and Rs. 1000 notes, cash on delivery (CoD), which was once the bulk of all online transactions in India, has plummeted to nearly zero – interestingly, companies such as Snapdeal and Flipkart claim that the actual impact on business has been limited, as most people have started using cards for payments.

For e-commerce companies, that’s a pretty good result, as there are many problems with cash on delivery, and it’s long been seen as a problem for the industry to solve. Interestingly, it turns out that there’s a Mumbai-based company that has been working on a solution for some time now, and its offering sounds like a good way to cope with a shortage of cash. The way it works is pretty simple – which is probably why the company is called Simpl – as merchants can choose to add it as another payment option, and all a customer needs to do is choose Simpl as your payment option instead of card or netbanking.

Roshan Sam, who’s part of the early team at Simpl – “we’re a startup, you know, we’re not thinking too much about designations,” he says – explains that although the idea has been in development for nearly two years now, it went live in February. One of the biggest early partners for Simpl was food delivery app Faasos, which Sam describes as a “great demonstration of the product”.
The first time you use Simpl, if you don’t have an account, you’ll be sent an OTP, and set up your account. Later, once you install the app, and the process becomes one-touch – just select Simpl, choose pay, and you’re done. The order will be delivered, the service rendered, and as far as the seller is concerned, the payment is done.

The experience is not unlike paying using a mobile wallet account – it is fast and easy, but the problem with wallet is that you have to remember to keep putting money into the account. With Simpl on the other hand you don’t have to pay anything. It consolidates your dues, and twice a month, on the 1st and 16th of each month, it presents a bill. That means that instead of entering your card details with every single transaction, you need to enter it just once, and you’re done.

“Another huge partner we’ve got recently is BookMyShow, which came online about a month ago,” says Sam. “We’re talking to everyone now, and we want more and more merchants to get on board.”

“The idea was to bring all the benefits of cash on delivery to the customer,” he adds, “while removing its flaws for the merchant.”
Simpl doesn’t charge you for the service – it makes its money from the merchants, and apart from Faasos and BookMyShow, it is also a payment option on Nykaa, an online beauty and wellness destination; Redwolf, an independent clothing label; Raccoon, which sells cool cases for phones; and several others, including FreshMenu and Hola Chef. The Simpl website lists 14 partners in all right now, though we are told there are several more in the works.

Like just about every other company in the payments space, Sam says that Simpl has also seen a lot more activity post the demonetisation of Rs. 500 and Rs. 1000 notes. “Merchants are of course looking to bring in as many payment options as possible,” says Sam, “but the customers are also now actively looking for modes of payment that are as easy and safe as cash. We’ve seen a lot of interest as a result.”

“We’re focused on building a good consumer experience that’s as simple as using cash, and that you will trust as much as cash,” Sam explains. In the case of online shopping, many of us prefer to pay cash not because we don’t have cards or netbanking solutions, but because failures and refunds are a hassle.

If a card doesn’t work, you’ll have to re-enter the details, wait for an OTP or enter your password, and go through a fair amount of rigmarole, every single time. If you place an order via a restaurant delivery site but the food doesn’t arrive for some reason, then you might have to wait for a week to 10 days for your refund. These are the kinds of scenarios that Simpl was created to fight, according to Sam.

There are no refunds – the charge simply doesn’t go on your bill if the service wasn’t provided, saving a lot of time and hassle. At the same time, Simpl promises authentication and safety that is provided without getting in your way. It looks at a number of details including your location, and your transaction history, to carry out multiple verifications, which, Sam says, has been very effective in bringing down failure rates.

Citing the example of one of Simpl’s partners, he explains how the service is useful for merchants. “Their failure rate was in the double digits with cards, it was really bad,” says Sam. “We were able to bring it down to 1-2 percent, and refunds weren’t a problem anymore either.”

The problem, right now, is that Simpl’s reach is limited. We’ve used it often to buy chai and snacks from Faasos, and occasionally for BookMyShow, but apart from that, the other sellers aren’t ones we use so often. Other users are also likely to find only a few of their regular destinations on the app right now. Simpl would hope that changes very soon.