You are here: Home  /  ELECTRONICS  /  A wearable alert to head injuries
ELECTRONICS

A wearable alert to head injuries 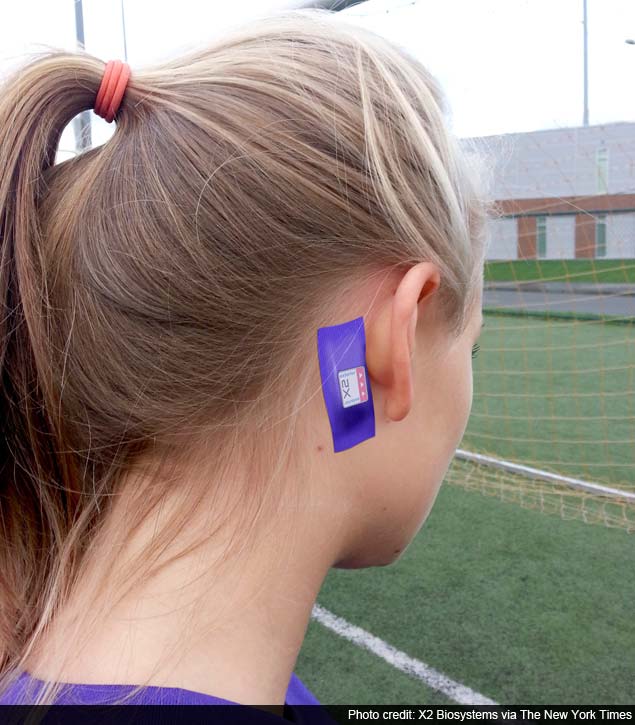 Hard knocks to the head are a constant concern in contact sports – and not just in football or boxing, where recent attention has focused. Millions of girls and boys play hockey, soccer, lacrosse and other sports where blows to the head from collisions and falls are part of the game, even in youth leagues and on high school teams.Head injuries can come from a single jarring impact during a game, or from a series of smaller jolts. In the midst of play, though, many blows aren’t necessarily easy to spot by coaches, physicians or parents in attendance.

A crop of new lightweight devices that athletes can wear on the field might help people on sidelines keep better track of hits to players’ heads during games and practice sessions. The devices, packed with sensors and microprocessors, register a blow to a player’s skull and immediately signal the news by blinking brightly, or by sending a wireless alert.

Athletes can wear the devices pressed tightly to their heads, held in place by a headband within a beanie, for example, or even by an adhesive patch and Velcro.

Many of the systems are in research and development, but a few products are coming to the market this summer, including the CheckLight, a washable beanie created jointly by MC10 and Reebok. The beanie has an electronics module tucked inside it; a blow to the head sets off an LED readout on the outside. It starts blinking in yellow if the impact is moderate, or red if it is severe.The CheckLight can be worn under a helmet for football or hockey, or by itself for soccer and other helmet-free sports. An MC10 spokeswoman said it would be available later this month at the Reebok website ($150).

Another sensor, the X-Patch from X2 Biosystems in Seattle, attached directly to a player’s head, sends data about hits wirelessly to the sidelines. The product will be out this fall, said Christoph Mack, X2’s CEO, who did not disclose the price.

Dr. Robert C. Cantu, a neurosurgery professor at the Boston University School of Medicine and medical director of the Sports Legacy Institute, which is seeking to prevent brain trauma in athletes, says he has looked into many of the new sensors as they have been developed. He’s in favor of them.

“They give you a rough estimate of total number of hits to the head the person has taken,” information of great importance to coaches, parents and athletes themselves, he said. “You don’t want to get a high number of hits,” he said, “because there is no hit that is good for your head.”

The new devices, however, shouldn’t be used to diagnose concussions, Cantu warned.

“There’s no magic number you can read on a device that means you have a concussion,” he said. “Many more factors besides forces are involved.”

Concussions can occur under a wide range of conditions, and no clear impact threshold has been established.

Stefan Duma, head of the Virginia Tech-Wake Forest School of Biomedical Engineering and Sciences, welcomed the new generation of sensors, particularly if they can be worn by women and by young players – both understudied populations in the world of contact sports and brain injury.

“They may help us understand more about the risks that come with head impacts,” he said.

He also had reservations about the devices, however, which he said could introduce a range of tricky problems. If a youth team on the field suddenly has several blinking lights, who will tend to the various players? What qualifications will the sidelines staff need?

Another issue could arise if opposing athletes see strategic possibilities in setting off the signals.

“Players might target people and get their lights blinking to get them removed from the game,” he said.

The CheckLight was developed by Reebok, which makes the beanie, and MC10, a startup in Cambridge, Mass., that is developing a line of flexible and stretchable electronics. Sensors in the cap – a tiny accelerometer and gyroscope – measure the head’s forward and twisting movements, said Steven Fastert, director of product development at MC10. An algorithm evaluates the impact, deciding whether the hit is negligible, moderate or severe.

The sensor can be used for about 13 hours continuously and can be recharged with a USB cable. The total number of hits can be read when the battery is recharged.

In research projects, scientists have long used special football helmets with instruments embedded inside them to measure head impacts. Dumas of Virginia Tech, for example, has used such helmets in his research for 11 years with its football players.

“I’m glad to see more systems and technologies coming to expand measurement outside the helmet,” he said.