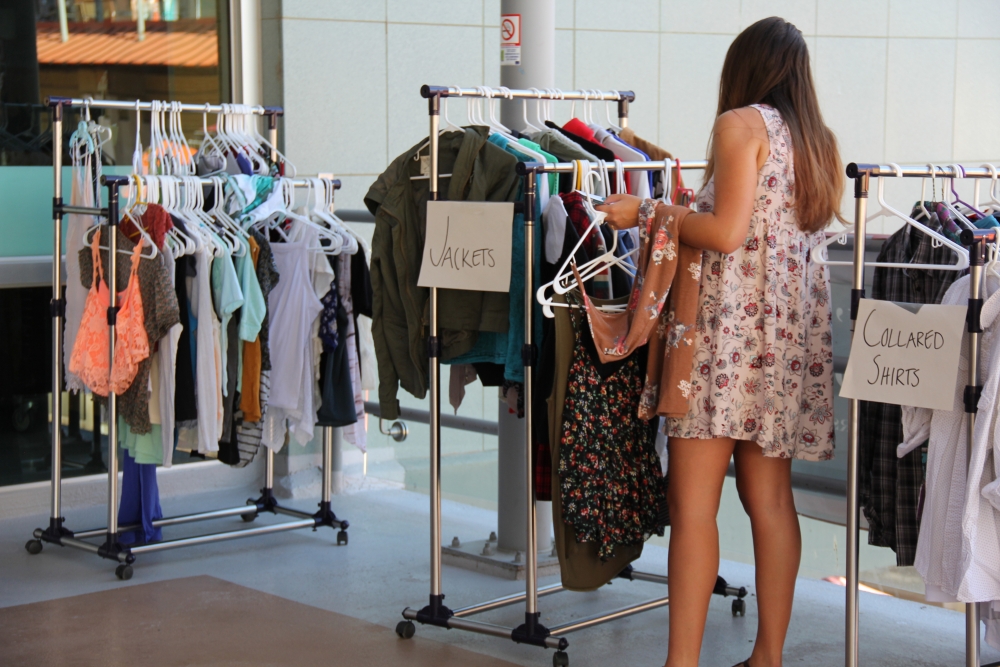 Photo by Marcella Baietto | The State PressStudent looking through donated clothing at the Earth Day Clothing Exchange at the terrace of Engrained in the MU on ASU’s Tempe campus on April 18, 2017.
By Karisma Sandoval | 16 minutes ago

In an effort to promote sustainable fashion, the Womyn’s Coalition hosted a recycled clothing event on Tuesday, allowing students to bring their old and unwanted clothing in exchange for new items.

The Womyn’s Coalition at ASU, an organization focused on gender equality, allowed students to bring articles of clothing in exchange for a voucher to pick up to five other recycled items that another student brought.

Megan Mcguire, a junior biomedical engineering major, serves as the director of marketing and social media chair for the coalition. Mcguire said she was surprised to see the large amount of donations at this event.

“We’ve had a lot of people from coalitions and students on campus bring bags and bags of clothing,” she said. “PiKapp (Pi Kappa Phi) was a huge donor for the men’s clothing.”

Mcguire said all the clothes at the event will be put to good use.

“We’ve probably had 50 trash bags total of clothing come through, and all the excess clothing that doesn’t get exchanged by the ASU students, ends up going to charity,” she said. “It goes to the Hemp Legacy Foundation, which houses abused men, women and children, people who are homeless or have been addicted to drugs or were sexually assaulted.”

Along with promoting the recycling of clothing, she said the coalition aimed to address the harmful impacts of fast fashion.

“It’s basically the rapid production of clothing using toxins and cheap materials and not really taking into account that not everybody is buying these clothes, and a lot of them are being thrown out,” she said.

The event included a speaker, Skya Nelson from Fed by Threads, who talked about the uglier side of the industry that is not advertised to consumers.

“Not a lot of people know this, but H&M and Zara use toxins in their clothes to make their clothes a certain color, and it’s a lot cheaper than using naturally, actually safe dyes,” Mcguire said. “They use a lot of water with this, and you can’t reuse the water after you go through six tons of water to dye one ton of clothing.”

Mcguire said people were surprised when Nelson discussed the consequences of fast fashion.

“Kids stick their arms deep into vats of toxic chemicals to get these clothes out,” she said. “When they heard him talk about these children having mangled arms and disabilities from the toxins, people sat there with their mouth agape.”

Mcguire said companies who claim to be environmentally friendly are not always truthful, a concept known as greenwashing.

“H&M has a green clothing drive where they have people bring in their old clothes, and they say they reuse it to make more fabric for their clothing,” she said. “Actually, they use about 1 percent or .5 percent of the clothing that comes in.”

Clothing exchange brings a greener alternative to traditional shopping from The State Press on Vimeo. Video by Marcella Baietto.

Ciara Garcia, a junior majoring in microbiology and co-facilitator for The Womyn’s Coalition, said she hopes this event makes students mindful of the injustices of the industry.

“You can start looking into the companies that you’re buying clothing from,” she said. “It’s just a consumption phenomenon that outsources a lot of its labor to impoverished countries, and the people who are most affected by this are impoverished women who have to work in textile fabric factories.”

“You can also participate in thrifting,” she said. “You can clothing swap with your friends, which I think is one of the best ways to do it, as you won’t be contributing to active consumption.”

Alexis Moore, a sophomore interdisciplinary studies major, came to the event looking for some new items to add to her wardrobe. Moore said an event like the one the coalition put on makes resisting fast fashion more accessible for college students.

“When I first heard about it (fast fashion), I was devastated because I want to look cute, but this is terrible,” she said. “Fast fashion and the way that it hurts our environment and obviously the people can feel really distant, but having things like this where you can benefit from it and talk about it in a way that is not threatening, is useful.”

Moore said she thinks every person needs to contribute to protecting the environment to truly create a difference in the industry.

“I feel like the change has to happen on a larger scale, something more systemic,” she said. “I think we all have a part that we can play, which is something like this — organizing and creating ways to trade fashion and be more sustainable.”