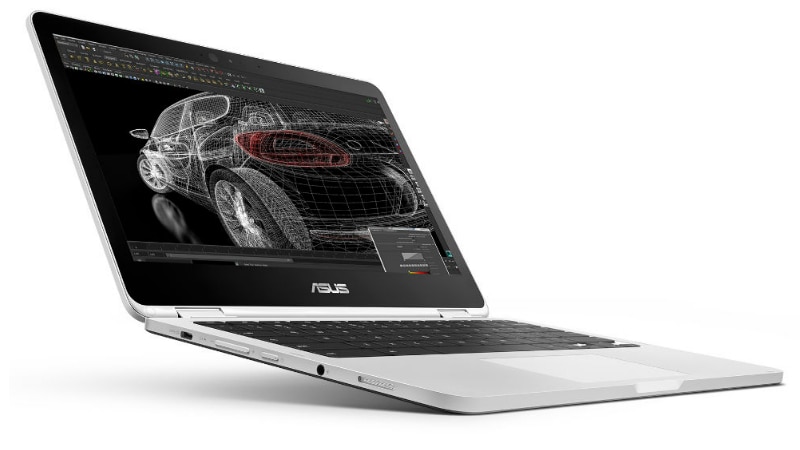 HIGHLIGHTS
The Asus Chromebook Flip C302 offers 10 hours battery life
It has a 360-degree hinge to convert into tablet mode as well
The 2-in-1 is priced at $499
Taiwanese manufacturer Asus has announced the Chromebook Flip C302 at the CES 2017 trade show. The 2-in-1 convertible, priced at $499 (roughly Rs. 34,000), is the newest entry into the high-end Chromebook market. The all-aluminium unit has a 360 degree hinge that lets you use it in tent mode, tablet mode, and even stand mode.

The Chromebook Flip C302 comes with Android apps support via Google Play and access to apps on the Chrome Web Store as well. It claims to last up to 10 hours of battery life, and has a 12.5-inch LED backlit FHD (1920×1080 pixels) display with 45 percent NTSC. The laptop runs on Chrome OS and is powered by the Intel Core M 6Y30 processor, or the Intel Core M 6Y75 processor. It comes with 4GB or 8GB of RAM memory configurations and 32GB / 64GB / 128GB of EMMC.

The Chromebook weighs 1.2kg and measures 304x210x13.7mm. Connectivity includes Wi-Fi 802.11ac, Bluetooth v4.2, microSD card reader, and two USB Type-C 3.1 ports. Furthermore, the 2-in-1 offers a backlit keyboard for night typing and an HD webcam as well.
Even though it has a slim and light form factor, the Chromebook Flip C302 comes with superior audio output, thanks to high quality stereo speakers and extra-large resonant chambers that generate up to 87dB of high-fidelity audio. It also comes with built-in anti-virus protection. The $499 (roughly Rs. 34,000) price tag is for the base model i.e configuration 4GB RAM and 32GB storage, and the price tag will increase if you opt for a higher configuration.
At the event, Asus also unveiled the lightest business laptop and a compact gaming PC as well. It also refreshed many of its laptops and PCs to integrate the new Kaby Lake processor.