You are here: Home  /  COMPUTERS  /  A quest for the mother of all computers
COMPUTERS

A quest for the mother of all computers 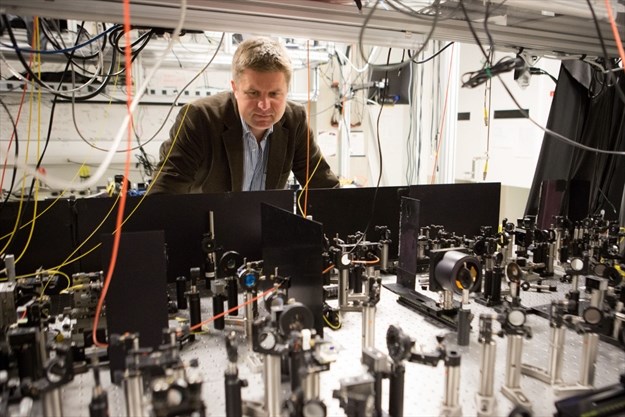 Kevin Resch is searching for the Holy Grail of high technology in the Institute for Quantum Computing at the University of Waterloo.

As the institute prepares to mark its 15th anniversary in November, Resch is the acting director — and part of an elite group of scientists working to bring the promise of quantum computers to commerce, medicine and communications.

Quantum computers are the next generation of supercomputers that harness the properties and movements of atomic particles — atoms, electrons, photons, ions — to process and store information.

Resch and his colleagues are working on things that win Nobel Prizes and spur trillions of dollars in economic development.

If that sounds like an exaggeration, consider this — a quantum sensor will be able to detect a single cancerous cell in the human body.

The first quantum revolution came out of an area of physics called particle-wave duality that led to the invention of transistors and lasers.

Both are at the foundation of the information age. Lasers send pulses of light containing information through the fibre-optic cables of the internet. Transistors attached to circuit boards are the technical hearts of traditional computers.

The second quantum revolution arrives when someone builds a quantum computer that has 50 quantum bits, or qubits, of processing power. That milestone heralds what scientists call quantum supremacy — the point at which quantum computers can do things classical computers cannot.

BlackBerry inventor Mike Lazaridis, the University of Waterloo and the provincial and federal governments invested hundreds of millions of dollars into the institute. Since it started in 2002, Lazaridis alone contributed more than $100 million. The building is named the Mike & Ophelia Lazaridis Quantum-Nano Centre.

They are betting it will produce the world’s first practical quantum computer that will spark the next industrial-super cycle. Quantum computers herald change many times bigger than the personal-computing revolution launched by Steve Jobs with the Macintosh in 1984, or the rise of the searchable internet in 1995.

“In 15 years, IQC has established itself as a globally leading centre for quantum information science research,” Lazaridis said in an email.

It was recently identified as the largest centre for quantum information science worldwide in a publication by quantum scientists in the United Kingdom, he said.

“It is one of a handful of centres in the world where top researchers go to contribute and to collaborate,” said Lazaridis.

There are now more than 200 researchers working in 55 labs located within three buildings on the University of Waterloo campus. There are 28 full-time faculty, and another 10 will be hired within a year. The institute has spun out six startups.

And for 11 years it held the world record for a quantum computer with 12 qubits of processing power. The record was broken only three months ago.

During the past 15 years the researchers at the institute came to focus on three main areas with the most promise — the development of a 100-qubit quantum computer, quantum sensors and ultralong-distance quantum cryptography.

Scientists believe a quantum computer with 4,000 qubits of processing power will quickly lay waste to all conventional cybersecurity that protects credit cards, bank accounts and personal information. So long-distance quantum cryptography is essential to safeguarding future financial transactions over the internet.

“There is no doubt that the second quantum revolution is upon us and the momentum around the world is accelerating quickly,” said Lazaridis.

All of the big players in tech, including IBM, Google and Microsoft, are working to build the world’s first practical quantum computer. Seven months ago the prestigious journal Science said Google expected to have a 50-qubit quantum computer by the end of this year.

“This revolution will change how we view and manipulate matter and energy, manufacture new materials, vastly improve simulation and measurement, computation and communication, data storage and data security, medical diagnostics and medicine and enable advances that would be impossible with even the best classical technologies,” said Lazaridis.

Lazaridis founded the Perimeter Institute for Theoretical Physics, then the Institute for Quantum Computing and finally Quantum Valley Investments — a venture capital fund that invests in quantum-related technology. He created a unique ecosystem that he branded Quantum Valley.

The Institute for Quantum Computing is at the centre of all this, but Resch is cautious about predicting when it will produce a practical quantum computer. He does not like predictions with dates and numbers.

“We haven’t hit any physics that says this shouldn’t be possible,” said Resch. “If you had asked me 10 years ago I might have said 50 years. But 10 years doesn’t seem crazy to me because of the advances we have seen in the last five in certain systems.”

If Google comes through by year’s end with a 50-qubit machine, as reported by the American Association for the Advancement of Science, a big question is whether it will be a practical quantum computer with real-world applications.

“We will see if they come up with it,” said Martin Laforest, the institute’s head of scientific outreach.

“I think there would be a fairly low risk of saying that we will have reached quantum supremacy within five years,” said Laforest.

A lot of modern science is about computer modelling and statistics. But even today’s best computers are no match for the complexity of the human body, or the jumbled information in large, unsorted databases.

“Let’s say you wanted to simulate a molecule of 230 atoms,” said Laforest. “You will need, just to store the information, you will need a hard drive made of all the atoms in the universe. That’s what we mean by impossible problems.”

When it comes to understanding the causes of Alzheimer’s disease, scientists are held back by the limits of today’s computers. It’s believed the mind-wasting disease is caused by proteins in the brain that fold improperly and produce toxins. But there are no classical computers powerful enough to simulate the folding of those proteins.

Quantum computers will be able to simulate exactly what happens to those proteins in the human brain. The machines will help doctors develop drugs tailor-made for an individual, new fertilizers to help feed a growing population and troll through huge databases of unsorted information, feeding trends into artificial intelligence algorithms.

Quantum sensors will be so sensitive, diseases will be detected at the earliest possible stages. A quantum sensor will find a single cancer cell in the human body, said Laforest.

The institute has built several small quantum computers during the past 15 years. Very small ones, one or two qubits. It has focused on controlling the atomic particles within the quantum processors before trying to build bigger quantum computers.

In short, it wants the small ones to be accurate and reliable before it tries to expand the technology into bigger quantum computers, said Laforest.

“So the amount of improvement we have done in the last 15 years was just phenomenal,” said Laforest.

“So it is almost to the point nowadays, the idea of building a quantum computer, it’s really transitioning from being a scientific problem, trying to understand what is going on, into an engineering problem,” said Laforest.

That’s just what Lazaridis likes to hear. He said the institute plays a critical role as a core member of Quantum Valley, which will help establish Waterloo and Canada as global leaders in the second quantum revolution.

“I am very proud of what the Institute for Quantum Computing has achieved. The past 15 years of IQC has been tremendously successful, and the future promises to be even more exciting,” said Lazaridis.

Tag a all Computers for mother of quest The