You are here: Home  /  COMPUTERS  /  Computers could get 100,000 times faster thanks to laser light pulses
COMPUTERS

Computers could get 100,000 times faster thanks to laser light pulses 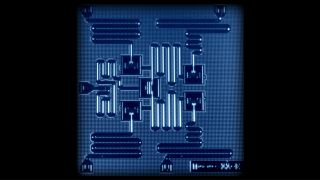 Computers could in future run up to 100,000 times faster than today’s electronics after a team of researchers made a breakthrough in so-called ‘lightwave electronics’.

The discovery by an international team that electrons in ultrafast laser pulses can be steered through a semiconductor, and at incredibly fast speeds, could even pave the way for quantum computers.

The researchers, whose work was published in Nature Photonics, produced pulses of laser light of just 100 femtoseconds (100 quadrillionths of a second) through a semiconductor crystal, controlling the peaks within it, but also twisting it.

That’s crucial because the heat generated by computers is all down to electrons colliding and producing energy; this new method moves electrons not only faster, but more accurately, so they don’t hit each other.

“In the past few years, we and other groups have found that the oscillating electric field of ultrashort laser pulses can actually move electrons back and forth in solids,” said Rupert Huber, professor of physics at the University of Regensburg who led the experiment.

“Everybody was immediately excited because one may be able to exploit this principle to build future computers that work at unprecedented clock rates – ten to a hundred thousand times faster than state-of-the-art electronics.”

The maximum clock rate, or calculation speed, of the very latest seventh-generation Intel Core i7 processor is 4.2 GHz, which is 4,200,000,000 clock cycles per second. This new work uses THz – terahertz radiation – which is the part of the electromagnetic spectrum between microwaves and infrared light.

Increases in computer processing speeds are incremental; to get to ten times faster would be massively impressive. If scientists can get to 100,000 times faster, well, that would a quantum leap – possibly literally.

The concept of lightwave electronics, which proposes that electrons can be guided by ultrafast laser pulses, could indicate a breakthrough in quantum computing.

Instead of zeros and ones – on and off – quantum computers use the laws of quantum mechanics to offer endless possibilities because by ‘exciting’ an electron it can be put in multiple states, or places, simultaneously. That’s called superposition.

“We managed to launch one electron simultaneously via two excitation pathways, which is not classically possible,” said co-author Mackillo Kira from the University of Michigan about the experiments. “That is the quantum world… In the quantum world, weird things happen.”

Crucially, the femtosecond pulses are fast enough to intercept an electron between being put into an excited state, and coming down from that state, so its superposition can be exploited to make many more calculations.

When an electron is in an excited state, it behaves like a wave, and when the two waves from its two simultaneous states interfere, it leaves a fingerprint in the femtosecond pulse that the electron emitted. “This genuine quantum effect could be seen in the femtosecond pulses as new, controllable, oscillation frequencies and directions,” said Kira.

However, the science emanating from the research could also herald something else; stroboscopic slow-motion cameras that reveal some of the fastest processes in nature, such as electrons moving around within atoms. “Our crystalline solids make for fantastic light sources in this field, with unprecedented possibilities for pulse shaping,” added Huber.