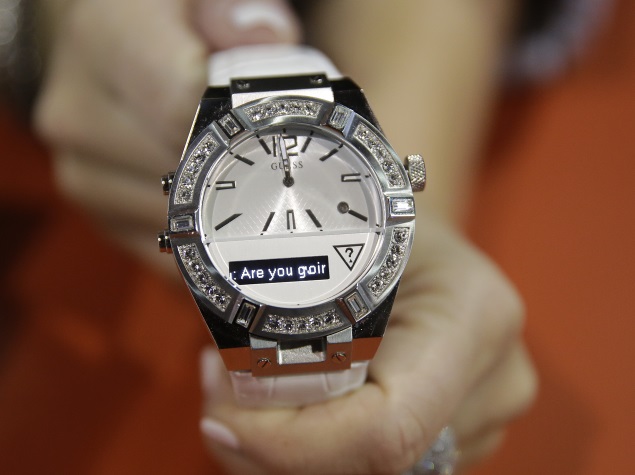 Fashion Designers Spruce Up Boring Smartwatches
Smartwatches don’t have to look ugly to be functional. Clothing and accessories designers are collaborating with engineers to produce computerized wristwatches that people will want to wear all day and night.

With Apple Inc. preparing to release a watch line that includes an 18-karat gold edition, rivals know they need to think beyond devices that look like miniature computers – with their rectangular screens and wristbands made of rubber-like materials. If the watches aren’t attractive, the market won’t grow beyond a small niche of users.

“The big brick on the wrist is not what a fashionable person is going to wear on a day-to-day basis,” says Cindy Livingston, CEO of Sequel, a Timex business that makes traditional watches under the Guess clothing brand. That’s especially so for women, she says – many of the existing smartwatches are simply too big for their wrists.

At the International CES gadget show in Las Vegas this week, Guess said it’s partnering with Martian Watches to make a line of fashionable smartwatches. Guess took its leading line of traditional watches, Rigor, and incorporated Martian’s technology. From a distance, the new Guess Connect watch looks like a Rigor, with analog hands and a crown, or dial, on the right. Closer inspection reveals the addition of two control buttons and a small, one-line display for notifications near 6 o’clock.

LG, meanwhile, consulted with outside design experts and a sister company that makes fashion and home-decor products. Its first smartwatch was rectangular primarily because of production constraints. A round model followed just months later.

Other companies took fashion into account from the start. Burg’s Dutch founder, Hermen van den Burg, has had 20 years of work in design. At CES, the company showcased new stainless-steel models and one with Swarovski crystals, both due out in March. Van den Burg says a watch, as something you wear, is highly personal and must fit your lifestyle. Cogito filled an in-house design studio in Paris with people from the fashion industry. Last summer’s Classic model has room for just 24 characters of text, so that most of the face can be devoted to making the watch a watch. A fitness tracker coming this April will have interchangeable parts to add patterns on the rim.

The Consumer Electronics Association projects that U.S. sales of wearable devices will reach 31 million this year, up 61 percent. Most will be health and fitness devices, such as step counters. Although general-purpose smartwatches are expected to reach just 11 million, or about a third of all wearable devices, that’s more than quadruple what was sold in 2014.

withings_activite_smartwatch_ap.jpg
Those seeking specialized functions might not care about design, but those looking to wear something around the clock might, says Ralph de la Vega, head of AT&T’s mobile and business solutions division. Apple will “raise the bar,” de la Vega adds. “Others are going to have to work hard to stay up with it.”
High fashion won’t come cheap. Health-tech company Withings hired traditional watch designers to make a fitness-tracking watch called Activite, pronounced Activity. It looks like a regular watch except for a second dial on the face to show progress toward that day’s fitness goals.

The watch can measure a lot more, but you’ll need a smartphone app to view that. Activite is being manufactured at an unspecified watch factory in Switzerland, rather than in Asia, where consumer electronics are typically produced. With high-quality materials, including calf leather for the band, Activite costs $450, compared with $200 to $300 for typical smartwatches today. But even at that price, Withings sold out an undisclosed number in a day when it came out in November.

At CES, Garmin says it partnered with designer Jonathan Adler to make patterned straps for its Vivofit 2 fitness tracker, to be sold in sets of three for $40. And Sony is making a stainless steel edition of its SmartWatch 3 for $50 more, or $300.

sony_smartwatch3_ces_ap.jpg
Efforts to make wearable technology more fashionable are intriguing, but companies will still need to convince consumers they need yet another device, says Jorge Aguilar at the brand-consulting firm Landor Associates. Apple is one of the few companies that might pull it off, he says, but even the iPad and iPhone maker still needs to make the case for yet another screen.

Apple has teased consumers with promises of an Apple Watch that can locate parked cars in a crowded lot or unlock hotel room doors with a tap. It will also make smaller versions, which might appeal to women, and designs and bands appropriate for different settings, such as a workout or a night out. But a lot still isn’t known, including how much these fashionable configurations will cost. The base model will cost $349. There’s been speculation the gold edition could cost in the thousands of dollars.

At such a price, the wearer will be making much more than a fashion statement.