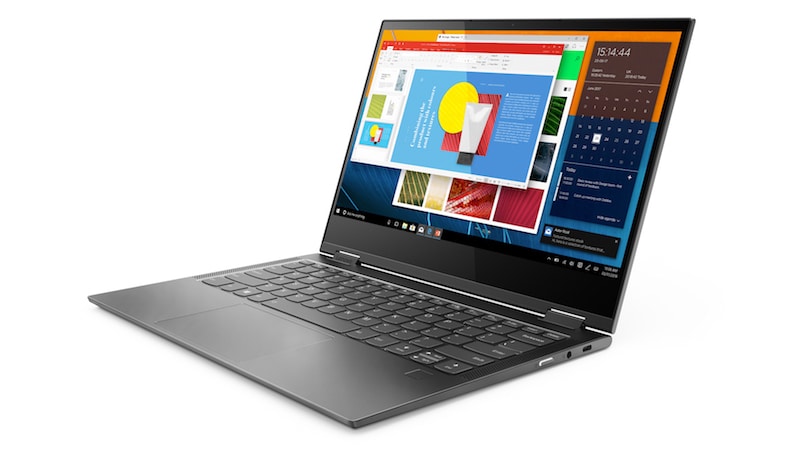 Lenovo has become the first company in the world to announce a laptop powered by the new Qualcomm Snapdragon 850 Mobile Compute Platform at the ongoing IFA 2018 trade show. The new Lenovo Yoga C630 WOS runs Windows 10 and supports standard Windows software. The key benefits promoted by Qualcomm and Lenovo are its 25-hour battery life, ability to wake instantly from standby, and constant Wi-Fi connectivity. Lenovo is also citing data showing how people are online longer and more often than ever before, and how some people feel physically anxious or sick when running low on battery power, to illustrate the appeal of such a laptop.

The Lenovo Yoga C630 WOS weighs 1.2kg, and is 12.5mm thin. It has a 13.3-inch full-HD IPS touchscreen, and users can buy an optional Lenovo Pen to scribble and use Windows Ink features. There are two USB Type-C ports with USB Power Delivery and DisplayPort video output, as well as Wi-Fi 802.11ac, Bluetooth 5, GPS, and stereo speakers. Buyers in different countries could have choices of either 4GB or 8GB of RAM, and 128GB or 256GB of UFS 2.1 storage. There’s a SIM card slot, and the integrated Snapdragon X20 LTE-A modem supports Cat 18 download speeds of up to 1.2Gbps and upload speeds of up to 150Mbps. It will ship running Windows 10 S.

The Snapdragon 850 should deliver a significant performance benefit over first-generation ARM-based Windows laptops which used the Snapdragon 835 processor. Qualcomm announced this new chip at Computex 2018 in June this year. It is a variant of the Snapdragon 845, optimised for laptop form factors rather than smartphones. manufactured using a 10nm process, with eight custom Qualcomm Kryo 385 cores running at up to 2.96GHz. It also features integrated Adreno 630 graphics, Snapdragon X20 LTE modem, and dedicated blocks for image signal processing, audio, sensors, security, and artificial intelligence.

Microsoft added support for 64-bit apps to Windows on ARM (WOA) earlier this year, after accidentally revealing that it was planning to do so. Developers can now submit 64-bit apps to the Windows Store as Universal Windows Platform (UWP) packages or offer them as standalone downloads. Most everyday x86 apps are capable of running under emulation, but 3D games and custom drivers are not supported.

Retail availability for the Yoga C630 WOS is set for November in Europe and some other countries, at a starting price of €999 (approximately Rs. 80,000). Lenovo has not yet confirmed whether or when this model might launch in India.