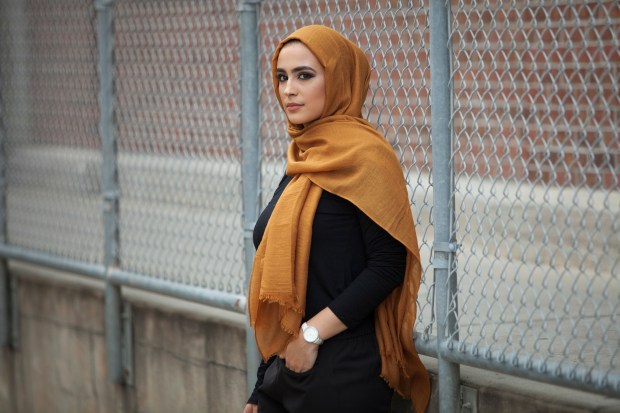 This hand-dyed luxury vicose hijab is part of the “Verona Collection,” introduced on Feb. 15, 2018 by Macy’s. The collection consists of ready-to-wear pieces including dresses, tops, cardigans, pants and hijabs in a variety of colors and fabrics and is available only on macys.com. (Courtesy Macy’s)

The line of “modest” clothing geared toward Muslim women that Macy’s announced this month has officially launched on the retailer’s website, offering items like dresses, long cardigans and tops, and hand-dyed hijabs in a line called the “Verona Collection.”

The move makes Macy’s the latest large U.S. retailer to tap into the Muslim clothing market, and Bay Area Muslim women have noticed.

“I am so excited,” said Zahra Billoo, an attorney and executive director of the Santa Clara-based Council on American-Islamic Relations. “I went online the day that the collection launched and bought a few things.”

Start your day with the news you need from the Bay Area and beyond.
Sign up for our new Morning Report weekday newsletter.

The items, available on the Macy’s website, range in price from about $13 for hijabs to between $50 and $80 for dresses and cardigans.

According to the Verona Collection website, the brand’s founder, Lisa Vogl, had trouble finding clothing that was modest, fashionable and affordable, which prompted her to launch the line.

Macy’s picked up the brand after Vogl went through its development program called The Workshop, which helps grow women-owned and minority-owned businesses.

“Through The Workshop at Macy’s, Lisa shared her vision to create a collection that speaks to a community of women looking for a solution to their fashion needs,” said Cassandra Jones, senior vice president of Macy’s Fashion, in a company statement. “Verona Collection offers a unique and understated elegance through everyday essentials designed for versatility and comfort, and through our partnership, we can better serve our customer looking for modest fashion.”

For Macy’s, which has floundered in recent years amidst struggling sales and announced in 2016 it would shutter about 100 stores, the collection is an opportunity to capitalize on the growing Muslim fashion market. Shoppers worldwide spent $254 billion in 2016 on Muslim attire, according to the most recent Global Islamic Economy report.

Other retailers, including Uniqlo, H&M, and Dolce & Gabbana, have tried courting Muslim women with ads and products, but Macy’s is the first major U.S. retailer to offer a collection of modest clothing at a relatively low price point, experts say.

Macy’s representatives did not answer requests for comment on the success of the brand so far, but Billoo said she ordered a few items from the Macy’s collection online last week when it launched and found that some items were already sold out — a possible sign that the clothing is in high demand.

“I’ve been wearing a headscarf since I was in middle school, so the quest was always finding clothing that is modest but also fashionable and affordable,” said Billoo. “The reality is that it can be challenging (to find something) that meets all those criteria.”

“They were having to accept whatever styles were being produced that could cover them in the ways they wanted to be covered,” Ijaz said. That often meant long, flowing, elegant attire.

“For the young Millennial woman who is edgier, that didn’t really align with the way we actually want to dress,” Ijaz said of that clothing. So she is starting her own line of clothes, called Seek Refuge, that makes hip streetwear with a mission to “aid refugees, empower women, and represent Muslims.” A portion of the proceeds will be donated to two schools in Jordan which educate Syrian children living in refugee camps.

A fundraising campaign for the Seek Refuge line was launched on crowdfunding website Indiegogo on Tuesday, and by Wednesday morning had raised just over $10,000, more than half of the project’s overall goal.

Ijaz said she hopes to provide more options for Muslim women who want different levels of modesty. The baggy tops and jacket in her collection, for example, could appeal to both conservatively dressed women and those who just want a stylish jacket.

She expressed excitement that options for Muslim women are growing, as evidenced by the Macy’s launch.

“I think it’s exciting,” she said. “Instead of just adding a hijabi model into a brand’s runway lineup, this is actually a brand for hijabi women and Muslim women who dress modestly.”

While more fashion companies have embraced the hijab, women in Iran have been protesting a law that requires they cover their hair. At least 29 people have been arrested in connection with recent protests there in which women were throwing off their head scarves, according to a report from the New York Times.

But in the U.S., after a year in which Muslim people have been attacked in political discussions and some barred from entering the U.S., many are applauding the move by Macy’s as one of inclusivity.

“Little things like this gives people hope — that someone’s including us and not ostracizing us,” said Saba Ali, a San Ramon resident and stylist.

Ali said she’s been a fan of the Verona Collection for a few years for its “modern” and “modest” aesthetic, and she was happy to hear that Macy’s was picking it up and promoting it within its collections.

Reading this on your iPhone or iPad? Check out our new Apple News app channel hereand click the + at the top of the page to save to your Apple News favorites.

As a stylist, Ali helps women — many of them Muslim — with shopping and managing their wardrobe, so she’s savvy about where to find stylish clothing that fits what they want. She said that in the last few years American style in general has shifted toward modesty, with baggy pants and sweaters becoming a popular staple.

Still, she said, it’s encouraging to see a mainstream American retailer marketing a line of clothing toward Muslim women, making it accessible for Bay Area women who may not know of good places to shop for modern, modest clothing.

“It’s a hopeful step in the right direction,” Ali said.