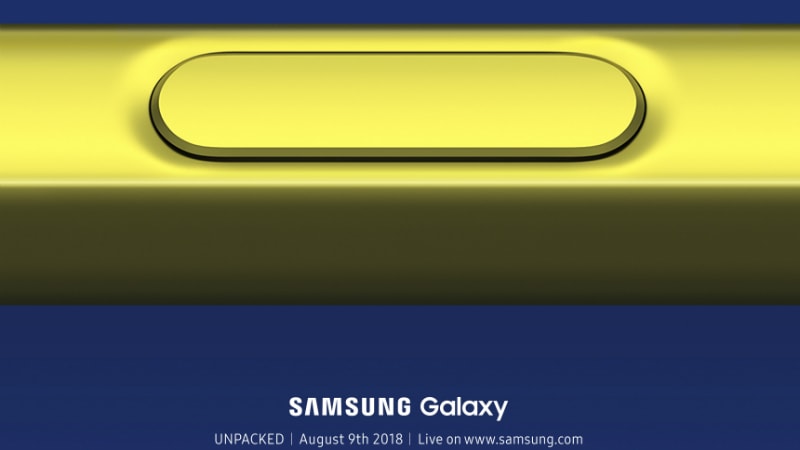 The first official announcement for the Samsung Galaxy Note 9 has been made. On Wednesday, the South Korean giant sent out media invites for the launch of an upcoming smartphone at its Galaxy Unpacked event to be held on August 9, putting to rest all rumours and leaks. And, while the invite does not explicitly mention the Galaxy Note 9, the presence of a stylus and the timing give it away. We could also expect the Galaxy Tab S4 to make an appearance considering it has been spotted on US FCC recently, as well as the Samsung Gear S4wearable.

The official invite for 2018’s second iteration of Galaxy Unpacked is now live on Samsung’s YouTube channel. The short 22-second clip gives us a glimpse at the S Pen stylus of the upcoming flagship Note series smartphone. This announcement comes just days after the Galaxy Note 9 was spotted on US certification portal FCC. But, that’s not the only Samsung device to be up on FCC’s website.

The Galaxy Tab S4, an expected successor to last year’s Galaxy Tab S3, has been listed on FCC, as first spotted by Android Police. With FCC ID A3LSMT835, the tablet has been listed with LTE capabilities. Other juicy details are hidden behind confidentiality requests, which is common practice on the public portal.

Talking about the Galaxy Note 9, the last few months have seen the smartphone being part of the rumour mill often. We can expect the smartphone to get top-of-the-line Qualcomm Snapdragon 845 or Samsung Exynos 9810 SoCs, a 6.4-inch QHD+ Super AMOLED Infinity Display with an 18.5:9 aspect ratio, up to 8GB of RAM, and up to 512GB of inbuilt storage. Some reports have claimed that the phablet will get an additional physical button, possibly for a camera shutter.

Even the Galaxy Tab S4 has had some of its specifications and features leaked before. A spotting on GFXBench revealed that the Samsung tablet would sport a 10.5-inch 2560×1600 pixels panel, an octa-core Qualcomm SoC, 4GB of RAM, and 64GB of storage.