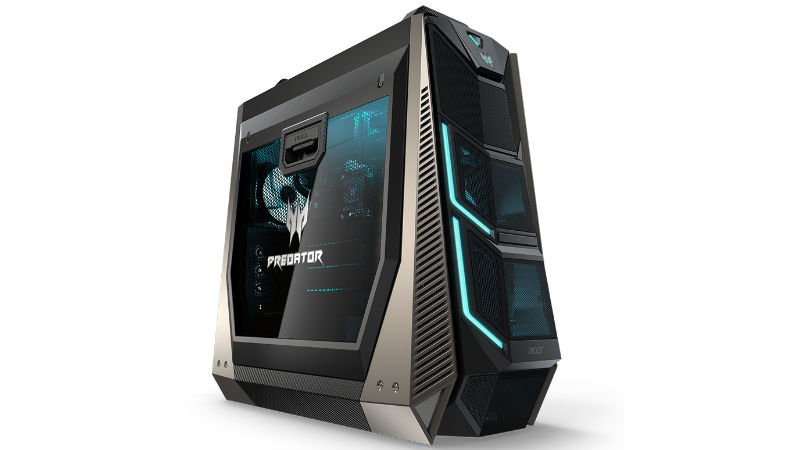 Acer India on Wednesday announced the launch of its Predator Orion 9000 gaming desktop – launched initially at IFA 2017 in Berlin. It is touted to be India’s first gaming desktop to feature Intel’s Core i9 Extreme Processor and Optane Memory. The premium Predator gaming seriesdesktop by Acer has been priced at Rs. 3,19,999 and will be available from Wednesday, March 21 via Croma stores and the company’s exclusive stores.

As mentioned, the Predator Orion 9000 comes with Intel Core i9 Extreme Edition 18-core processor and up to 128GB quad-channel DDR4 memory. Acer Predator Orion 9000 series features a black-and-silver spacecraft-like exterior with customisable RGB lighting along the sides of the front bezel. The device comes with two handles and wheels covered with a carbon fibre pattern. Acer claims that “the new rigs can be easily moved from one location to another.”

The desktop also has up to two Nvidia GeForce GTX 1080Ti graphics cards for gamers. Equipped with the Intel’s Optane memory, the Orion 9000 also sports a 2TB hard disk. Additionally, it features liquid cooling and Acer’s IceTunnel 2.0 to keep the temperature down. It is an airflow management solution that separates the system into thermal zones that provide individual airflow tunnels to expel heat.

Speaking at the launch, Chandrahas Panigrahi, CMO and Consumer Business Head, Acer India, said, “We are thrilled to welcome to our gaming arsenal the iconic Predator Orion 9000 gaming desktop. The Orion 9000 is a desktop of extreme power designed especially for the demanding professional gamer with advanced cooling and game ready features to easily take on any game out there. Acer has the widest portfolio of gaming PCs in India with products catering to budding gamers to professionals. With the launch of this, we have moved a step closer to our commitment of delivering the best gaming products for gamers at every level.”