You are here: Home  /  HOME & GARDEN  /  Are these PoMo palaces really worth saving? 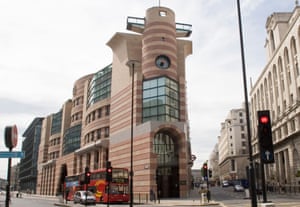 Postmodern architecture in Britain closely matched the career of Margaret Thatcher. Its first flickerings were in the mid-70s, about the time she became leader of the opposition, followed by the style’s first substantial works during her first term as prime minister. By the time she left office in 1990, PoMo was on its way out, disowned by many of its practitioners, its demise hastened by the recession and building slump of the time. One or two monuments, such as the MI6 building and No 1 Poultry in the City of London, were due to the time lag in construction projects completed a few years later, but both were designed in the 1980s. When things looked up again in the embryonic Blair era, architects would admit to being anything but postmodern.

The early years of the style, as is sometimes said of early Thatcher, were anarchic and anti-establishment, championing the individual against the dead hand of over-mighty state power; quasi-punk, a rebellion against public bureaucracy grown fat and stale. At the end (again parallels might be drawn), it was a tool of exploitation, a dressing of corporate expansionism. It progressed from naughtily designed shops and eye-catching cocktail bars to thin disguises on mammoth office buildings. Throughout, the clients were mostly private – entrepreneurs, developers, speculators, corporations – in contrast to the public commissions for schools and council housing that nourished an earlier generation.

In its fall, postmodernism was condemned as trashy, superficial, gimcrack, tasteless and dishonest – and so it often was. But, with the cosmic inevitability of such things, inexorable as the movements of planets, that which was once reviled must first be recalled with affectionate irony, then made the subject of scholarly exhibitions and in due course considered for listing as buildings of architectural or historic interest by Historic England (formerly English Heritage). Postmodernism, indeed, was first revived by the architects FAT while its body was still warm, then attracted the attention of the artist Pablo Bronstein, who published a guide on the subject, and was celebrated by the Victoria & Albert Museum.

Now the listing campaigns are hotting up: Historic England recently tried and failed to persuade the Department of Culture to protect James Stirling and Michael Wilford’s No 1 Poultry. Terry Farrell would like his wedge-shaped office building at 76 Fenchurch Street, completed in 1987, to be spared what he sees as insensitive alterations. For some it will come too late. The barrel-vaulted civic centre in Chester-le-Street, County Durham, completed in 1982 to the designs of Faulkner-Brown Hendy Watkinson and Stoner, has gone. Farrell’s TV-am in Camden, London, in which the brash new world of breakfast television found form in the brash new architecture of PoMo, has been changed beyond recognition. The Sunar furniture showroom in St Pancras, the only British work by the American giant of PoMo, Michael Graves, lingers as a fading memory like a half-glimpsed pharaoh’s tomb. Marco Polo House, by the architect-developer-and-later-naturist-gardener Ian Pollard, and for a while home of the Observer, went in 2014.

It would help to say what postmodernist architecture was. It was a reaction against the impersonal, abstract and rationalist qualities of modernist architecture which instead favoured decoration and references to historical styles, both of which had been taboo under the modern movement. Where the latter had insisted that the exterior perfectly express the interior, PoMo liked putting up facades that disguised whatever was behind. PoMo embraced fakery, theatricality, perversity, complexity and contradiction. It played games with the rules of architecture, of scale and of the idea that you should be able to see what is holding a building up. It had colour – colour! – and curves.

The theory was that in these ways architecture could communicate directly with its users and passers-by, and by fusing history and pop art would speak a language everyone could understand. At the same time irony and wit were employed; most architects didn’t feel comfortable making straight copies of historic styles, so had to put them in inverted commas and place them in knowingly incongruous, literately illiterate combinations: steel beams with Egyptian masonry, fluorescent colours with learnings from Palladio.

At its best, postmodernism expressed exuberance, humour, joie de vivre, was both literate and playful, and took pleasure in the qualities of building materials, their heft and lightness and permanence and transience. It considered what a door or a window might be, and how a human being might relate to a building. It was concerned with what a detail could be. It had an unpompous self-awareness combined with an appreciation of dressing up: delusions of grandeur were welcome, if they came with a touch of wit.

Into this category falls CZWG’s striped deco-Egyptian office building at Aztec West outside Bristol, with grand hemi-cycles set into otherwise box-like exteriors, as a way of making a sense of place in the placelessness of a business park. Also several works of John Outram, where a love of multicoloured brick, precast concrete and the possibilities of early laser printing combined with musings on ancient mythology to breed oversize columns with flaming capitals on the outside of the premises of Harp Heating in Swanley, Kent, and amagnificent pumping station on the Isle of Dogs, London. Also a private house in Sussex, where the ornament was ever more densely layered, as in a particularly rich cake.

No 1 Poultry, outcome of a long planning battle by its developer, Peter Palumbo,had the misfortune to be much imitated (imitation being something postmodernists enjoyed) between publication of its designs in 1985 and its opening 12 years later. It therefore looked like a copy of projects that were in fact copies of it. Buildings less than 30 years old don’t get listed unless in exceptional circumstances, which is why Historic England’s recent attempt was turned down, but it has a force and grandeur that demand it should eventually be so honoured.

Aztec West, some other CZWG projects, and the surviving works of Outram should be listed, as should the more po-faced law courts in Truro, Cornwall, by Evans and Shalev. So should Farrell’s Fenchurch Street building and the house in Holland Park, London, created for his own use by Charles Jencks, the critic who applied the term “postmodernism” to architecture. Imbued with cosmic symbolism, it is a fusion in spirit between Sir John Soane’s house and the fantasy palacesthat monomaniac self-builders put up from time to time in different parts of the world. Stirling’s extension to what is now Tate Britain, and Venturi Scott Brown’sSainsbury Wing on the National Gallery, are already protected, by virtue of being attached to buildings already recognised as historic.

But the real test will come when the MI6 building’s time for listing rolls round. With these fortress-like headquarters for a spy organisation, PoMo’s claim to be the style of the feisty upstart disappeared, as did Farrell’s good intentions to make the location accessible and village-y. It is ponderous, notwithstanding the attempts of later, clumsier neighbours to make it look ballerina-like by contrast. But it is a major work of its period that, by the criteria of such things, means it should be considered.
//

Tag Are these PoMo palaces really worth saving?