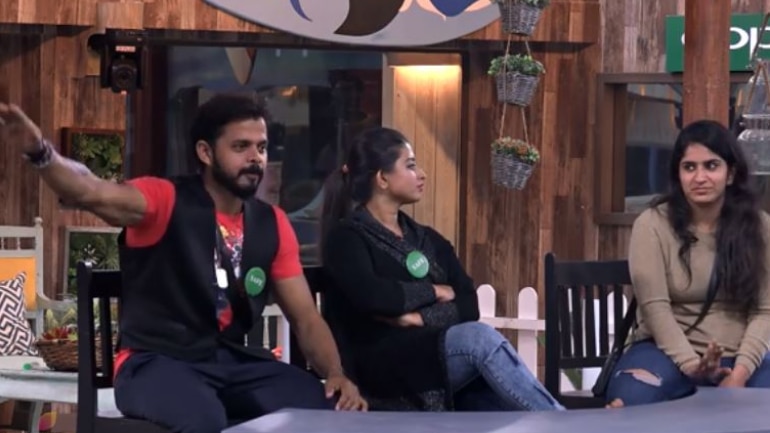 omi tries to make Deepak jealous but getting close of Rohit. Surbhi makes fun of him. Later, Deepak discusses about top six contestants, which irks Jasleen. Later she gets into an argument with him and asks him just to speak for himself. Later in night, Karanvir explains Rohit that the house is divided into small groups. Sreesanth, Dipika and Megha are a part of one group, Deepak, Surbhi, Romil and Somi another and asks him to join hands with him and Srishty.

Housemates wake up to the title track of Amar Akbar Anthony. Sreesanth tells Megha and Dipika that Karanvir is trying to please Happy Club and they shouldn’t trust him. Megha tells Sreesanth that anyhow they should get Rohit and Srishty out of the game and Sreesanth agrees to her. He also talks about destroying the happy club.

Sreesanth denies from performing any duties in the house and tells Romil that he has been advised bed rest. Surbhi takes it up with other housemates and shares her concern regarding the same. Romil tries to talk to Sree but he is in no mood to listen to him but later agrees for kitchen duties.
Bigg Boss announces nomination task, which will help the contestants to be safe from elimination. As a part of the task, a safe zone was created in the garden area, which had three chairs and three flagposts. At the beginning of the task, Dipika, Surbhi and Deepak were the first ones to enter the safe zone. After every gong they had to mutually decide to leave the safe zone and give the spot to someone they thought deserved it the most. Surbhi and Deepak asked Dipika to leave her seat first but she didnot budge and even got into a heated argument with Surbhi. As result, Surbhi exchanged her seat with Somi. The entire house was seen strategising and convincing each other to gain a spot except for Karanvir, who did not talk to either of the team.

Due this task, viewers got to witness the clear divide in the house, where Romil, Surbhi, Deepak and Somi were one team while Dipika was with Sreesanth. Karanvir and Sristy formd another group who managed to influence Rohit to join them, while Megha and Jasleen were seen trying to make a place between the brother-sister duo of Dipika and Sreesanth.

Deepak and Somi didn’t want Rohit to be safe while Surbhi felt bad. When Bigg Boss announces that the next gong would be the last one, Surbhi agrees to change place with Rohit but this doesn’t go down well with Sreesanth, Dipika, Megha and Jasleen. Dipika who had earlier denied to change places asks Sreesanth to replace her in the safe zone. Surbhi and Dipika get into argument but later Surbhi agrees and the three contestant in the safe zone during the end of task were Sreesanth, Surbhi and Somi.

The constestants who are still nominated for eviction are Karanvir, Srishty, Rohit, Dipika, Deepak, Jasleen and Megha.

Dipika talks about her changed equation with Karanvir to Sreesanth while Surbhi talks to Karanvir about how Dipika talks about being KV’s friend but not once considered to make him safe from nomination. After KV, Sreesanth and Dipika start bitching about Surbhi. Karanvir tells Romil that Dipika has replaced Shiv’s place in the house as Sreesanth’s friend. Karanvir tells Deepak that this task has properly divided the house. Megha and Jasleen who are dead against Rohit and Srishty talk about why Surbhi wanted to save Rohit. Megha says they (Happy club) need a servant in the group as well. And both laugh at the joke.

At midnight, Karanvir and Surbhi discuss about Dipika and Sreesanth. Surbhi tells him that she is irritated with Sree while KV with Dipika. Surbhi tells him how Sreesanth crosses all limits when in task and also discuss how he doesn’t want to participate in tasks. Karanvir tells her that he feels it’s below his standard to compete with the housemates.