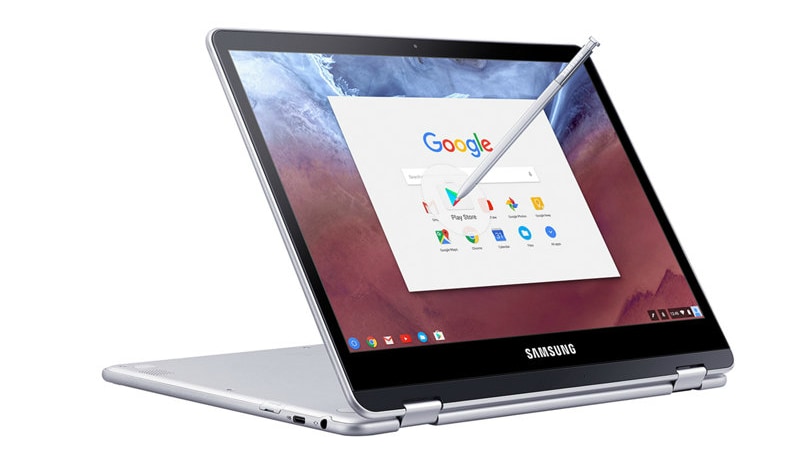 HIGHLIGHTS
The Chromebook Plus has Google Play pre-installed
New 15-inch Notebook 9 weighs just 984 grams
Notebook Odyssey sports Nvidia’s GeForce GTX 1050 GPU
Along with other tech giants, Samsung is also at CES 2017 with a lot of great goodies in its bag. The company unveil two fresh Chromebooks built from the ground up to support Android apps. They are also the first Chromebooks to support a stylus and enable inking on screen. Apart from this, Samsung also unveiled two Notebook machines – one meant for the workaholics and the other for hardcore gamers. Let’s dig a little deep into the entire arsenal that Samsung announced in Las Vegas.

The Chromebook Pro will presumably be priced higher than the Chromebook Plus as it sports an Intel Core M3 processor, while the Plus has an ARM-based chip inside. Apart from this, both the devices have the same innards, and sport a 360-degree hinge for switching it into tablet mode, tent mode, or stand mode. The devices feature a 12.3-inch (2400×1600 pixel) LED display. They have 4GB of RAM, 32GB of internal storage, sport USB Type-C ports, and support 4K video output.
The laptops weigh just 1.07kgs and are easy to manoeuvre in one hand when in tablet mode. The stylus is tucked on the edge of the laptops, and clicks out just like on Samsung’s Note smartphones. This is also the first Chromebook from Samsung to offer Google Play pre-installed.

New and improved Notebook 9 laptops
Samsung even refreshed its Notebook 9 range of laptops at CES. The 13.3-inch and 15-inch models are touted to be extremely lightweight at 799 grams and 984 grams respectively. It’s ideal for those who lug around their laptops everywhere. The laptops are powered by Intel’s seventh-generation Core i7 processors paired with up to 16GB DDR4 RAM. There’s also Nvidia’s GeForce 940MX graphics card embedded on the 15-inch model, and support for fingerprint scanning has also been introduced. The laptops have been launched in Crush White, Light Titan, and Violet Blue colour options. There’s a 180-degree hinge that allows you to flatten the screen on the table, and the keyboard is also backlit. As for ports, the new Notebook 9 comes with USB Type-C port for charging and connectivity, and there are also two USB 3.0 ports and one USB 2.0 port on board. Samsung claims that the new Notebook 9 should last up to 15 hours on a single charge. There are no pricing and availability details announced for the new Notebook 9 series.

samsung notebook9 Samsung Notebook 9
Samsung Notebook 9
Samsung Notebook Odyssey
After what seems like a long time, Samsung has again tried to dabble with the gaming market by launching the Notebook Odyssey. The laptop comes in two sizes – 15.6-inch and 17.3-inch. Design wise, it keeps up the shenanigans to sport a red backlit keyboard and a Black coloured body. Keeping gamers in mind, there’s one USB 3.0 port, two USB 2.0 ports, one HDMI port, and an Ethernet jack. The 15.6-inch variant weighs 2.4kgs, and ships with Nvidia’s latest GeForce GTX 1050 GPU. It is powered by Intel’s latest Core i7 processor and offers up to 32GB of DDR4 RAM configurations. For storage, the machine can take up to 256GB on SSD, and 1TB on hard drives.

Samsung Notebook Odyssey
The 15.6-inch variant will be made available in February for $1,199 (roughly Rs. 81,300). The 17.3-inch model is still in the works, and pricing and availability is unknown. The bigger model will support up to 64GB of DDR4 RAM and up to 512GB of solid state storage.