Flower power: the gardens that caused modern art to bloom 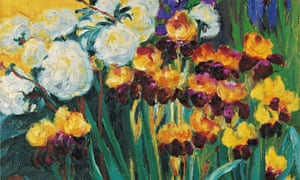 In Seebüll, in the northernmost German state of Schleswig-Holstein, not far from the Danish border, the wind ruffles the reeds of the low-lying marshes reclaimed from the sea. The trees bend on the horizon like crouching animals. A low autumnal sun gleams over barrel-shaped red barns. All is quiet. 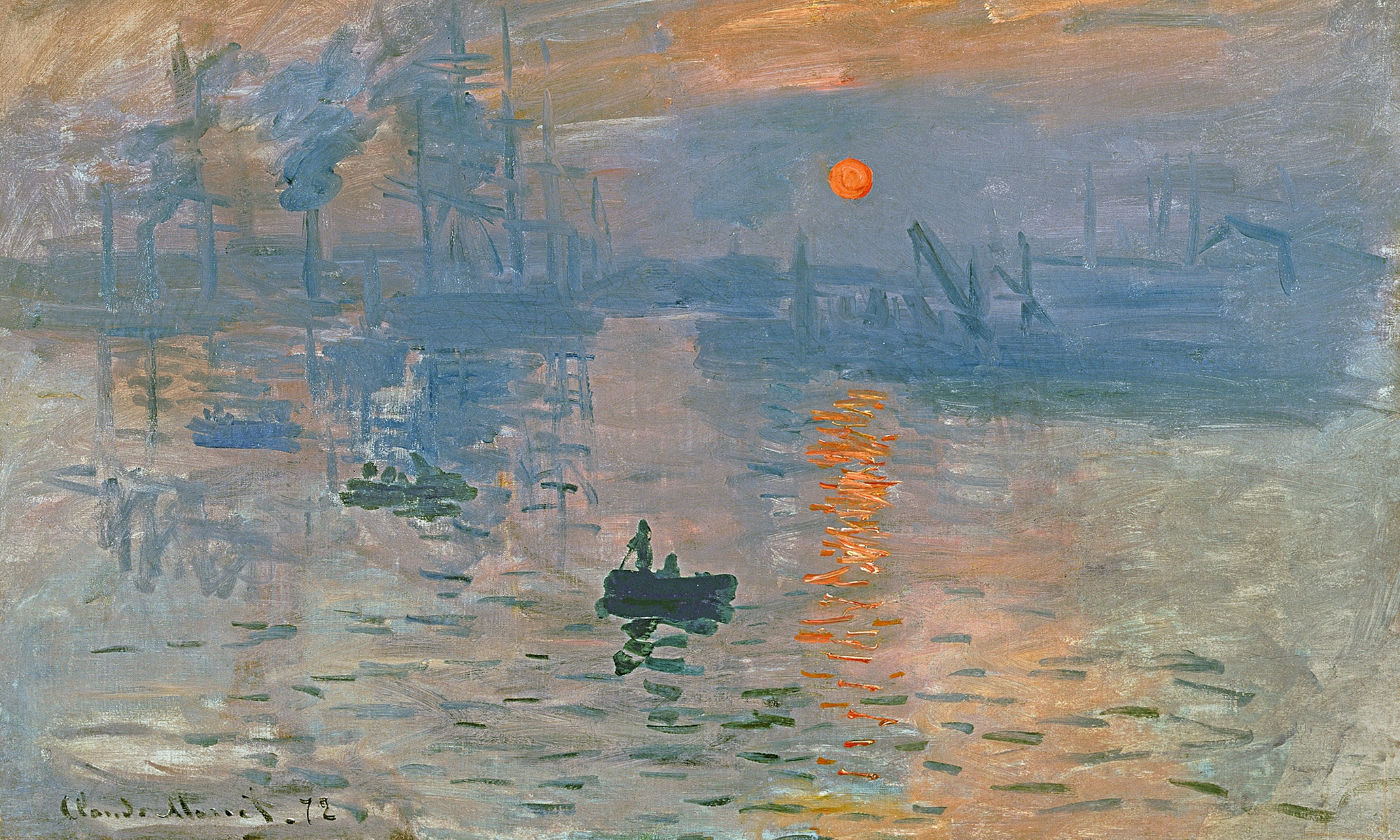 The man who made Monet: how impressionism was saved from obscurity

In 1927, the expressionist artist Emil Nolde and his wife, Ada, were walking in these remote parts and fell in love with the landscape. They built a house, a fiercely modernist lump of architecture, all brick-faced, small-windowed severity on a hillock. And beneath it they fashioned the most beautiful garden, designed in the entwined shape of their initials and filled with vividly coloured flowers.

It was hard work. The land is below sea level, the soil is brackish, the weather fierce. But they cherished and nurtured the space, wrapping it round with a sheltering screed of reeds, employing a gardener to help them plant the beds with an ever-changing tapestry of blooms. In autumn, they are bright with late roses, yellow rudbeckia, jewel-like geums and dahlias, with their pin-cushioned heads in rich reds, bright pinks and warm oranges.

His garden was always an inspiration to Nolde; his response to it dramatically altered the way he painted. In 1908, he wrote of his first garden on the island of Als in the Baltic Sea: “They are such calm and beautiful hours when one sits or moves about between the fragrant and blossoming flowers. I really wish to give my pictures something of this beauty.”

So he did, filling canvas after canvas with the flowers that can be seen in Seebüll today. These splashes of strong colour in oils and in watercolours are violently expressive of powerful emotions. You can see the colours he used, preserved in stripes on the doorpost of the little thatched summer house where he sat to work and where his assistant cleaned his brushes: cyclamen, deep brown, turquoise and green.

Nolde is just one of 42 artists represented in Painting the Modern Garden: Monet to Matisse, a major new exhibition opening at the Royal Academy on 30 January. Spanning the years from the early 1860s to the 1920s, the show reveals just how many painters were serious gardeners – Monet pre‑eminent among them, but also Caillebotte, Pissarro, Matisse, Joaquín Sorolla, Kandinsky and Klee. Van Gogh is also included because he loved gardens, though his life was never settled enough for him to plant one.

Each artist was inspired by their garden in slightly different ways, and their tastes in plants were as different as their painting styles. All were drawn to the creative nature of horticultural activity, however, shaping a private world of beauty that was increasingly fashionable at the time. “Gardening, as a popular pursuit that takes place in the back yard, starts in the mid 19th century with the rise of bourgeoise society,” says Royal Academy curator Ann Dumas. “The exhibition links what is happening in society with what is happening in gardening.”

The transition from formal public parks and gardens to small, intimate spaces coincided with developments in botany. As co-curator William Robinson, from the Cleveland Museum of Art, notes in the catalogue: “The opening of distant economic markets and increased ease of travel brought a flood of new plant species [to Europe], imported from the Americas, Africa and Asia. This importation, combined with advances in botanical science, led to the industrial production of a vast array of new hybrid flowers with more varied shapes, sizes and colours.”

As a keen horticulturalist, Monet not only ordered the latest plants from mail order catalogues but also planted the great drifts of colour in the borders of his garden at Giverny. He was influenced by English garden writers such as William Robinson (author of The Wild Garden and no relation to the curator) and Gertrude Jekyll. When you look at the paintings he made of his iris border, with its careful gradation of purples and mauves, you can see a glorious collision of artistic and horticultural theory, a shift from formal to the informal garden, from classical to modern design.

The garden, once planted, became an outdoor studio. “It was a visual environment over which they had complete control,” says Dumas. “Monet loved this. Rumour has it that he used to go round Giverny with pots of paint so he was actually designing the colour scheme to the planting as he would a canvas.

“His garden is very meticulously planned, so he has constant motifs to paint. There is a funny story about him painting trees in the autumn and when some leaves fell off, he had them stuck back on again. He may be a nature painter but he is very much in control of nature.”

The German impressionist Max Liebermann also drew inspiration from his garden. In his heyday, from around 1879 until the 1930s, he was one of the most famous artists of his time; a president of the Prussian academy, his work was so expensive and sought after that he only needed to sell three paintings a year to keep himself in style. In 1909, at the age of 62, he bought a plot of land on the shore of Lake Wannsee and built a villa and garden there. Increasingly, as the first world war prevented him from travelling, the garden became his subject.

Today, after years of neglect, it has been restored as an oasis of calm and colour, running down to the water where leisure boats float silently by. On one side of the beige stone house designed on classical lines, there is an English-style garden, with pumpkins peeping out among the red dahlias and purple anemones. On the other, a swath of grass, broken by colourful planted beds. A birch grove breaks the formality at one border; opposite, a series of hedged gardens, each taking on its own character. A mass of red lilies backlit by the sun gives the eerie impression that you have walked into one of his most popular paintings.

Liebermann called these his “green rooms”, and for him – as for many of the other artists in the exhibition – the garden represented a private space, shared with close friends and family. Sometimes they became a sanctuary. In his final years, Liebermann was harrowed by the rise of the Nazis, and it is hard to walk around the garden today without thinking of this once expansive, powerful man taking refuge in the space left to him. He died in 1935 at the age of 88, embittered and ostracised; his wife, Martha, bedridden with a stroke, killed herself in 1943 after she received an order demanding her deportation to Theresienstadt concentration camp.

Shadows hang over Nolde’s garden, too. His early support for National Socialism did nothing to protect him when he was declared a degenerate artist and forbidden from painting even in private. The tiny Unpainted Pictures he produced in defiance are among his most haunting works; strikingly they contain none of the flowers with which he was still surrounded and to which he returned after his postwar rehabilitation.

From Giverny, Monet could hear the guns of the first world war as he painted. He conceived his towering series of nearly abstract water lilies canvases as his response to the carnage. “Yesterday I resumed work,” he wrote in December 1914. “It’s the best way to avoid thinking of these sad times. All the same, I feel ashamed to think about my little researches into form and colour while so many people are suffering and dying for us.” Explains Dumas: “Monet saw painting almost as a war effort, his personal patriotic gesture.”

But it is not only war that peeps into these garden canvases. In the works of the Spanish painter Santiago Rusiñol, who was also working around the same time, the shade belongs to crumbling, abandoned gardens of the Spanish aristocracy. Avant-garde painters such as Kandinsky and Klee concentrate on the vitality of the earth itself. “They seem to draw sustenance from the regenerative power of nature and gardening,” says Dumas.

This sense of gardens having a meaning beyond themselves is part of what makes the Royal Academy exhibition so intriguing. Anyone who has hoed a small patch of land, or struggled to cultivate a seed, will know that the act of gardening is a moral gesture – an attempt to bring order and peace to a chaotic and disrupted world.

This was true for these artists. As Dumas says: “In this period you get the rise of the modern city and industrialisation, which in turn stimulate a desire to retreat to nature, and to make your own capsule of peace and tranquillity and beauty.”

So Pierre Bonnard, another keen gardener who used to discuss planting plans with his friend Monet in Giverny, cultivated a wild, overgrown garden and, in his paintings, turned it into a paradise. Dumas explains: “There is a very elegiac feeling about his garden paintings; he is retreating to this golden world of classical art. The figures often adopt the poses of classical sculpture because he is very influenced by an idea of trying to recapture a lost Arcadia.”

Bonnard appears in two panels by Édouard Vuillard that are borrowed from a private collection and have not been seen before. Painted in 1898, they show the garden in Burgundy belonging to Thadée Natanson, co-editor of the influential avant-garde magazine La Revue Blanche, and his wife, Misia. In one, Misia is shown reclining on a bench; in the other, Bonnard bends down in the foreground, stroking a cat while the actor Marthe Mellot reads a newspaper beside him. It is a scene drawn from life. But on the lightly patterned panels, dappled with flowers, overhung with trees, there are no shadows. This is a dream of a garden – an assertion of loveliness and tranquillity in a troubled world.

• Painting the Modern Garden: Monet to Matisse is at the Royal Academy, London W1J, from 30 January to 20 April. royalacademy.org.uk.