You are here: Home  /  CLOTHING  /  Why The Founders Of Gender-Free Clothing Company Stuzo Refuse To Sacrifice Who They Are
CLOTHING 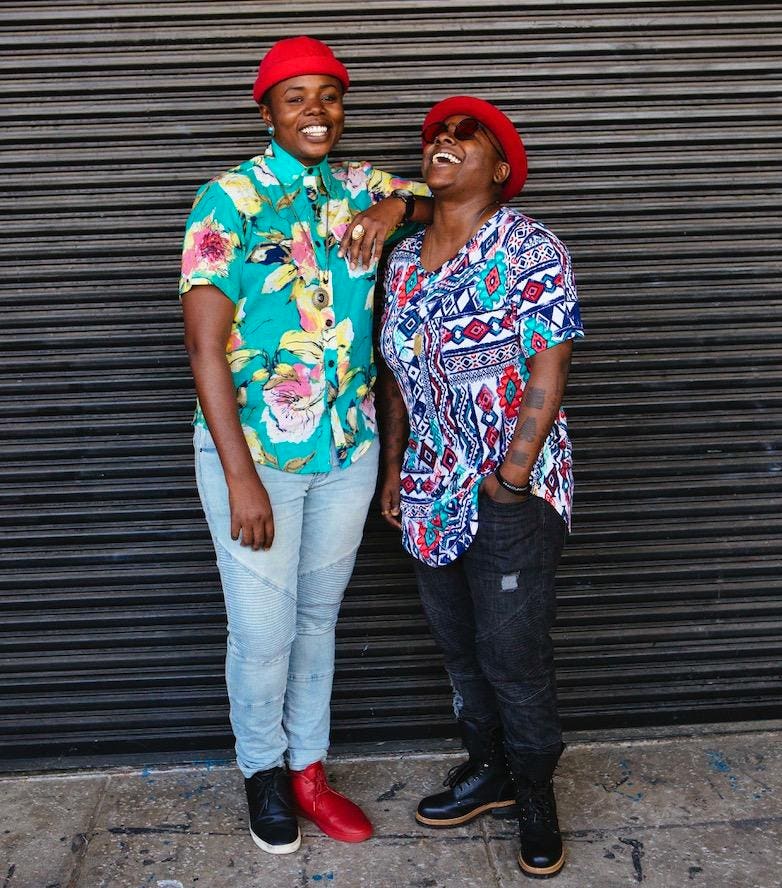 “Clothes don’t have any organs last time we checked,” declare Stoney Michelli and Uzo Ejikeme on their company, Stuzo Clothing’s website. It’s why the married couple markets their clothing as gender free, with each piece designed for any and everyone who wishes to wear it.

“Our mission is to affirm and to empower people to live their truth,” Ejikeme says.

Stars like Tiffany Haddish, Ruby Rose, Spike Lee, and Lena Waithe have all sported their designs, but at Stuzo, you don’t have to be a celebrity to be considered royalty. “Wearing Stuzo is like deciding what to wear with your crown today,” the website says. Many products, in fact, have “King” or “Queen” splashed across the front.

Stuzo, based in Los Angeles, began as a t-shirt company. Michelli was living in New York, working on her BFA in graphic design, and growing tired of fielding questions from people in her life asking whether she was “still gay.”

“My response would be, ‘Yup, still gay, not going anywhere,’” she says. “It dawned on me that I’m sure I’m not the only one going through this experience.”

So, Michelli designed a t-shirt touting her new, “Yup, Still Gay,” catchphrase and began to sell it. It took off, and a decade later, that shirt remains one of their most popular designs.

When the initial shirt became popular, Michelli began to design other logos, too, like shirts that said “Live Your Truth” and “Woman Up.” At a party in 2009, she met Ejikeme, who encouraged her to keep promoting her designs. In 2010, they decided to officially go into business together, launching Graphic Queen Apparel, which would eventually become Stuzo, a combination of their first names. Now, Stuzo sells everything from printed tees to crop tops, jackets, hats, hoodies, pants, and capes.

The couple built the business one step at a time. They didn’t create a business or financial plan. Rather, they simply focused on using whatever money they had to get Michelli’s shirts out into the world.

They may not have had any business background, but they did have ambition. “I’ve always known I could accomplish anything I wanted,” says Ejikeme, “and Stoney has the same drive. What’s been great about our union is if one of us can come up with something, a crazy idea, the other one always supports it, says yeah, let’s do it. Let’s try. There’s never really anything off the table.”

Ejikeme says they are still learning all the time, taking on each challenge or unknown as it arrives. As Stuzo has grown, she says, they have had to focus more on the business aspects of what they do, rather than the excitement and energy that comes with starting something new.

“We still have heart and excitement throughout,” she says, “But in the beginning the focus was more about being excited, the reception from people.” Now, she is concentrating a lot more on making sure they have consistent cash flow and everything else necessary for a successful operation.

She emphasizes to other entrepreneurs that research in the industry you’re attempting to join is vital. “Learn as much as you can,” she says. “Learn the basics of whatever field you’re in, business 101, learn the fundamentals. Eventually, you can’t run away from them.”

Another challenge as they’ve grown has been determining their identity as a brand. The original name of the company, Graphic Queen Apparel, was unappealing to customers who identified as men, which is in part what led to the name change.

Additionally, Ejikeme and Michelli initially struggled with how much queer-focused clothing to sell. They didn’t want to be pigeonholed as an exclusively queer or lesbian brand. Their eventual solution: stop caring. They stopped trying to please everyone and started to sell clothing that reflects who they are, rather than who they think people want them to be.

“We were shying away from letting that side of us show because we didn’t want to be put into a box,” Michelli says, “but there are so many facets to who we are. We can be all that and not worry about what a certain amount of people are saying.”

Michelli and Ejikeme see themselves as a balance of masculinity and femininity, and they work to have their clothing reflect that balance as well. It is important to them to be passionate about the clothing they sell, as opposed to catering their designs to what others want. “We stopped worrying about what other people would like and what got more sales or what was it people were gravitating to,” says Ejikeme. “It was sort of a relief, and we were able to really focus on building the company.”

Michelli says this choice is what has kept them going all these years. “We’ve never given up on the company and this dream. It’s in us because it’s not something we’re doing for the monetary value or the notoriety. We’re fulfilled by this and we believe in it, and that’s why it has been nothing but success.”

In short, Michelli and Ejikeme have learned to trust themselves and live their truths, and they believe doing so is an integral part of being an entrepreneur. “Create for yourself first and always,” Ejikeme says. “Create what you want to see in the world. Don’t try to emulate anybody else. Don’t try to do what anybody else does because no one looks at the world through your eyes the same way you do.”

Above all else, Michelli says, take that first step. Even if it’s something small, like posting something about your products on Instagram, signing up for a class, or doing some research, just take a step forward and keep moving toward your goals. “Don’t give up,” she says. “You can never go wrong with doing something you love and trusting your gut. It won’t fail you. That’s what we’ve done.”

I profile queer, female-identifying entrepreneurs, from their products and innovations, to the company cultures they strive to create, to the challenges they work to overcome.