You are here: Home  /  ELECTRONICS  /  What are the key reasons behind India’s rising electronic exports?
ELECTRONICS

What are the key reasons behind India’s rising electronic exports? 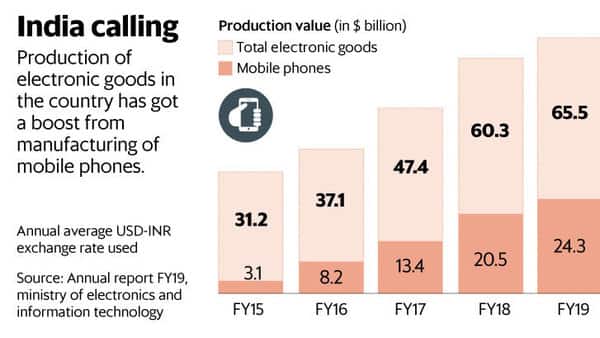 Amid the gloom in India’s economic data, one bright spot that has emerged is the rising trend in exports of electronics. Total production of electronic goods in value terms more than doubled from $31.2 billion in FY15 to $65.5 billion in FY19, led by mobile phones, shows data from the Reserve Bank of India’s annual report issued on 29 August.

Value of domestic manufacturing/assembly of mobile phones has jumped nearly eightfold from $3.1 billion in FY15 to $24.3 billion in FY19 (see chart).

What is driving electronic exports at a time when the overall export outlook is subdued? Are the government’s exports-oriented policies for electronics bearing fruit? Or did India just get lucky, gaining from the trade tussle between China and the US?

Although the export numbers look impressive, analysts at Spark Capital Ltd point out that value addition is limited. “India has become the 2nd largest producer of mobile phones, replacing Vietnam. Notably, we reckon that the net value add is only in the high single-digits at present, since most of components of mobile phones are imported, and only assembling takes place in India. However, some companies have started manufacturing printed circuit board assembly (PCBA) units in India, taking the value add to ~15%,” they said in a report on 28 August.

Nonetheless, the rise in electronic exports bodes well for India’s balance of payments and its stretched trade deficit. “A shift in the nature of telecom imports i.e. from built-up units to intermediate supplies, likely feeds into exports of electronics, including consumer items. This, over time, might help narrow India’s current significant net electronic import position,” said Radhika Rao, economist at DBS Bank Ltd.

Tag are behind electronic Exports India's Key Reasons Rising The What