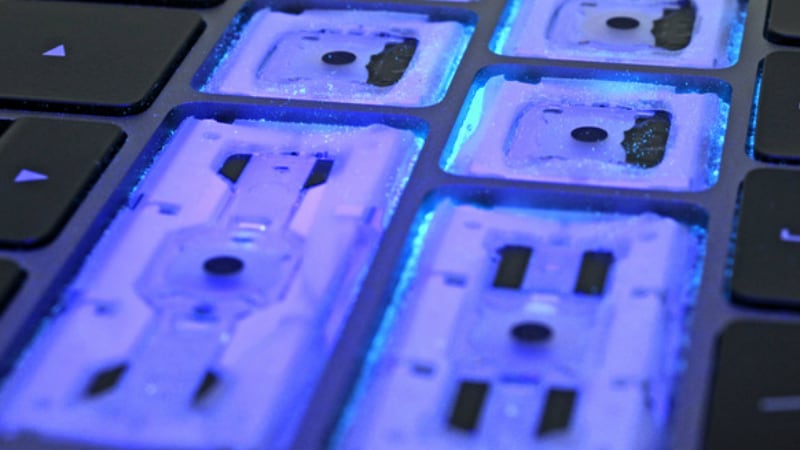 Earlier this month, Apple updated its MacBook Pro lineup, with new 13-inch and 15-inch Touch Bar models, and announced they had “quieter” keyboards, but didn’t reveal whether it had fixed the dust issue that it had acknowledged earlier this year. DIY repair authority iFixit did a teardown soon after, and it revealed how the Cupertino giant has addressed dust issues affecting its Butterfly switch keyboard design. iFixit said Apple’s claim of a “quieter” keyboard was a cover-up. To lend more weight to its claim, iFixit has now done a comparison between the old and new MacBook Pros, showing us how much of an improvement the new model brings, with respect to dust-resistance.

The teardown initially revealed that Apple used a silicone membrane underneath every key to keep away dust particles from finding their way inside and jamming it up. In a new dust-test, iFixit sprayed dust on the 2017 and the new 2018 MacBook Pro models and compared the result. Because of the silicone membrane, most of the dust was stopped from entering the key mechanism. However, the shield has some holes to allow the keycap clips to attach, and if the dust gets through those holes then issues may surface. The 2017 keyboard, in comparison, gets flooded with dust.

iFixit concludes that while the 2018 laptop sees great improvements in dust management, the membranes do not protect the key mechanism a 100 percent. However, the chances of dust entering in have greatly reduced. “On the 2018 keyboard, with the addition of more particulate and some aggressive typing, the dust eventually penetrates under the sheltered clips, and gets on top of the switch-so the ingress-proofing isn’t foolproof just yet,” iFixit notes.

Furthermore, an internal Apple repair document, obtained by MacGeneration, targeted towards repair technicians, clearly sees Apple confirming that it has addressed the dust issue. In the document, Apple tells technicians that “the keyboard has a membrane under the keycaps to prevent debris from entering the butterfly mechanism.” The report also states that the procedure to change the space bar is also different now, and videos and documents on servicing will be released to them when the keycap parts begin shipping.

All of this shows that while the 2018 MacBook Pro models come with an “improved third-generation keyboard” that may enable “quieter typing”, it also largely resolves the dust issue even though Apple decides to keep mum about it.