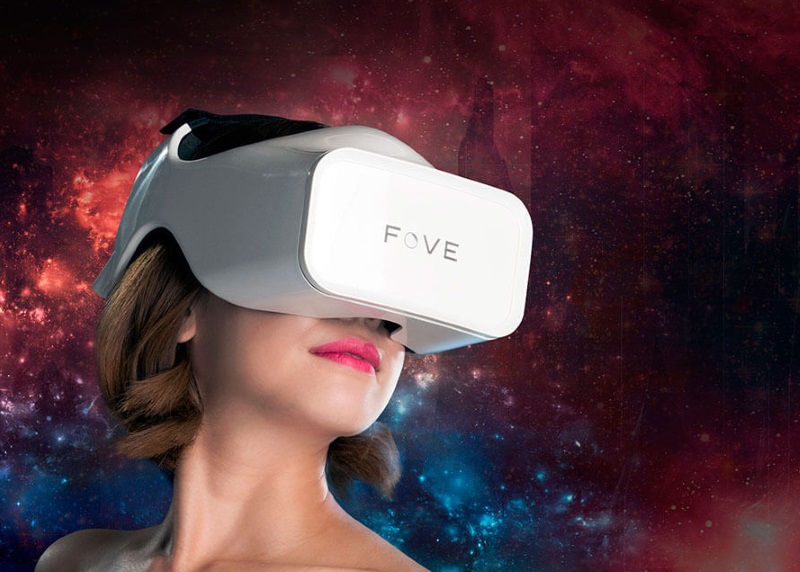 No more fiddling with remote-controller buttons or a mouse. Just look. San Francisco-based startup Fove has developed eye-tracking for virtual reality – that kernel of technology many feel is key for the illusion of becoming immersed in a setting.

Glance, and a video-game character talks back. Or use a death stare to shoot down virtual spaceships. Watch a movie of a forest or a room and be able to look around wherever you want.

“It allows you to go inside the world that’s behind the display,” said Yuka Kojima, Fove’s co-founder and a rare female chief executive in male-dominated Japan Inc.

Fove, which comes from “fovea,” the part of the eye with the sharpest vision, from “field of view,” and the word’s similarity with “love,” has devised a way to use tiny infrared sensors inside headset goggles to monitor the movements of a wearer’s pupils.

It’s a small company, founded in 2014, with offices in Tokyo, San Francisco and Los Angeles, and employing just 17 people. But Fove is getting attention from the fledgling VR industry, as “virtual reality” is known, and winning backing from innovative financiers. It has raised about $500,000 through Kickstarter.

Virtual reality could revolutionize entertainment, like movies, games and live-streaming of sports. It has myriad potential business applications, such as giving apartment hunters a virtual look at real estate options and car buyers tours of virtual showrooms.

It could also prove useful for training of pilots and surgeons, and has already been adopted by the military. The make-believe experience could aid in so-called “empathy training” for police and other service providers. Pornography is another potentially lucrative application.

Rahat Ahmed, co-founder and chief of strategy at New York-based Trinity VR, an investor in technology and emerging markets, says the big plus of VR is “intuitive interaction.”

“Every major company has to have a VR-AR strategy,” Ahmed said recently at the CLSA Japan Forum in Tokyo, referring by AP to “augmented reality,” which enables users to see three-dimensional objects in the real world, while VR delivers a 360-degree fictional universe. “It allows connecting – going fishing with your father who is far away.”

New technology usually has its share of detractors, and there are worries that VR could have harmful effects if users become too immersed in their fantasy environments and estranged from reality.

But Fove developers say VR can play a positive role.

In one poignant demonstration, a bed-ridden grandmother wears a Fove headset to “attend” her grandson’s wedding, sending a human-shaped robot controlled by her eyes in her place. The woman gestures happily, reaching out from her bed as if the newlyweds are standing before her.

With the help of Fove and a Japanese university, for example, a young man with spinal muscular atrophy, an illness that has weakened his arms and fingers, used eye movements to play a piano.

“We want to do things with VR that people haven’t thought about, or have thought to be impossible,” said Wilson, who met Kojima while she was studying English for four months in Australia. “And we have got other secret projects in the future.”

Fove has potential rivals, such as electronics and entertainment company Sony Corp. and Facebook’s Oculus, which later this month will begin shipping the consumer version of its Rift virtual-reality headset for $600, plus $1,500 for an “Oculus-ready” PC.

Oculus says it is working on eye-tracking for its headsets, and other players like Eyefluence Inc., based in Milpitas, California, have also developed the technology.

Microsoft Corp. will soon have a developer version of its augmented reality device, HoloLens, for $3,000.

Fove’s headset for game and other content developers will become available sometime later this year for about $500 – though for the headset to work well, you need in addition a good PC costing $1,000 or more.

The company plans to make 1,200 such headset kits, but Kojima says Fove could boost production to as many as a million headsets if she clinches a deal to supply them to Internet cafes. Fove also is offering to license the technology to other companies.

Looking at the space behind the figure, the background came into more vivid focus and the figure in front dimmed bit, enhancing the illusion of perspective.

Kojima, who is also a filmmaker, became interested in story-telling from when she was studying at Tokyo’s prestigious Ochanomizu University. Later, while working as a game producer at Sony Computer Entertainment, she began to wonder why games allowed only “yes” or “no” choices, when stories usually called for more subtlety.

Fove, she believes, can fix that by making the interaction more intuitive.

“It should feel more like the way we are facing each other now, laughing, making eye contact, a nonverbal form of communication,” said Kojima. “Nuances should be part of storytelling. It should be natural.”