You are here: Home  /  COMPUTERS  /  Telangana ropes in NIC for its own e-mail service
COMPUTERS

Telangana ropes in NIC for its own e-mail service 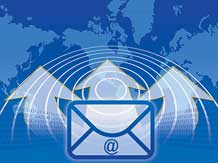 Telangana government has introduced an exclusive e-mailpolicy to be implemented from next month. Move aims to create a secure environment for e-mail communication system used by state machinery.

The new e-mail policy mandates all the staff to use only the official e-mail service being provided by the NationalInformatics Center (NIC). The state government’s ITdepartment will begin training from next week to enable all 33 departments switch to the new system.

“Currently about 60-70% of the senior officers are using the official service for e-mail transactions within and outside the government while the usage of the official mail service at the lower levels is just around 30-40% as staff and officers at the lower rungs prefer using Yahoo, Google services etc to send the mails even for official purpose,” Jayesh Ranjan, IT secretary of Telangana government told Business Standard.

This practice will be replaced with a new system of usage of e-mail service with all the built-in security protocols from next month, according to Jayesh Ranjan.

Once the new e-mail policy regime comes into force, an adverse ACR (annual confidential reports) entry will be made against any official who is found using a mail id other than official mail id provided by the state government.

“There are certain security related risks inherent in e-mail communications which necessitate the adoption of requisite precautionary measures. Use of digital signature certificate and encryption shall, therefore, be mandatory for sending e-mails deemed as classified and sensitive, in accordance with the TS Information Security Policy and Guidelines to be notified by the GoTS (government of Telangana state),” the IT department stated in its orders.

The government has gone to the extent of recommending the officials on overseas trips to use only static IP addresses/Virtual Private Networks (VPN) or one-time password for accessing the official mail services in view of the security concerns that exist in other countries.

The government has also mandated all the users of official mail accounts to maintain latest operating system, anti-virus and application patches on their access devises.

The government machinery comprises of around 3 lakh employees at various levels in the state. Of this, clerical staff such as typists and other lower level employees are a not a part of this system as they need not have official e-mail accounts.

Tag e-mail service NIC for its own Telangana ropes in