You are here: Home  /  ELECTRONICS  /  Wearable devices seen as next major platform by app developers
ELECTRONICS

Wearable devices seen as next major platform by app developers 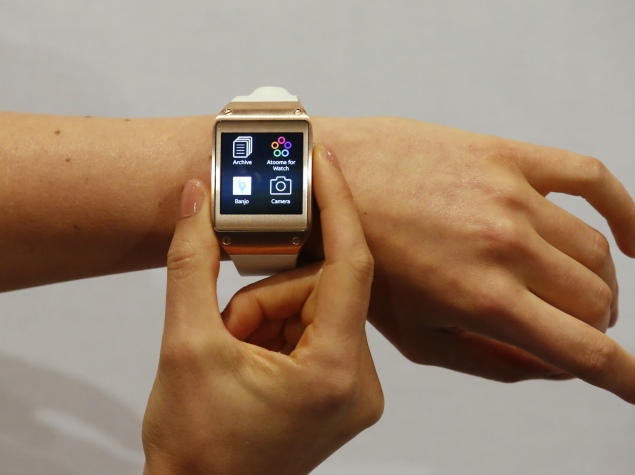 Wearable computers like Google Glass and the Samsung Galaxy Gear watch may not have caught fire yet, but that hasn’t stopped mobile game developers from rushing to create apps for the new devices, eager to seize what they hope is the next big moment in consumer technology.Niccolo DeMasi, the CEO of mobile games maker Glu Mobile, compares the potential of wearables to that of Apple Inc’s iPhone launch in 2007 – an event that was the catalyst to create much of the mobile app world that exists now.

DeMasi and others are betting that by developing compelling apps designed with the wearables’ special features in mind, they can create overwhelming demand for the products.

“A whole new app ecosystem is going to be born,” said Shawn Hardin, chief executive officer of Mind Pirate, which will release “Global Food Fight,” its first game for Google Glass, this month. “Those who are going to make that happen in a big way are going to be valuable companies because of it, and those who wait too late won’t be a part of it.”

The market for mobile game apps is expected to grow to $17 billion this year from just $6 billion in 2010, analysts said, and wearables could fuel growth in the years to come.An array of new smartwatches and devices like fitness tracker Fitbit will go on display this week at the Consumer Electronics Show (CES) in Las Vegas, heralding a potential breakthrough for the devices in 2014.

Google Glass is expected to launch broadly sometime this year. So far, its user-testing version has only been available at a $1,500 price to about 15,000 developers and consumers who registered to be part of its early adopter program.

Galaxy Gear (First impressions) smartwatches from Samsung have garnered mixed reviews since their September launch, and consumers have not warmed to them yet.

Despite the slow start, Juniper Research expects more than 130 million smart wearable devices will ship by 2018. Moreover, global shipments of wearable “smart glasses” alone will reach 10 million each year by 2018, compared with an estimated 87,000 in 2013, according to the research firm.

Wearable computing devices basically function as mini-computers, mainly strapped on a user’s wrist or face, though they may end up being worn on other parts of the body, too. In developing apps for them, programmers will focus on their voice-command features as well as GPS, gyroscope, compass and WiFi capabilities. Apps for more conventional mobile devices, by contrast, mostly use their touch-screen interface. 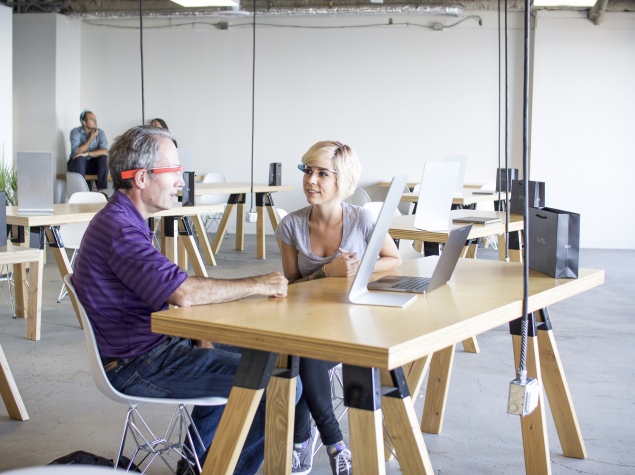 Fun and games
Glu wanted to get a jump on its rivals by creating a word puzzle game called “Spellista” for the prototype of Google Inc’s Glass.

Because Glass allows hands-free experiences, Spellista’s gameplay relies on voice commands and head movements that work with the device’s gyroscope. With voice commands, a gamer can snap pictures on its 5-megapixel camera and create word puzzles to share with friends.

Another distinct feature of Glass is how it transmits sound. With Spellista, a user hears the game’s tutorial through sound vibrations traveling through the skull behind the ear rather than traditional speakers. That lets the user simultaneously hear ambient sound.

Over 2,000 developers, including Glu, have access to the programming code and tools needed to design apps for Glass.

With Mind Pirate’s app, “Global Food Fight,” the Silicon Valley startup wants to demonstrate that wearable devices are well-suited for “micro-engagement” – or 30- to 90-second game sessions.

The three-dimensional app is designed for multiple players. Gamers can use head movements and taps on the Glass touchpad to virtually hurl tomatoes or gooey pies at one another and build obstacle courses to help them dodge hits.

“You could sit on a train and launch a food fight using voice commands, and you could be playing with multiple people” who could be virtually anywhere, Hardin explained.

Mind Pirate has set up an incubator program, providing resources to four developers to work on games and apps for Glass and other wearable computing devices in partnership with the Canadian Film Centre, a Toronto-based film training institute.

Timothy Jordan, senior developer advocate for Google Glass, said the game concepts that developers come up with need to be path-breaking.

“If something works well on another platform and you stamp it on Glass, you’re doing it wrong,” he said.

“It’s early days in wearables, but I would be unsurprised if 2017 to 2027 turns out to be a great 10-year wave for all wearable computing, whether it’s watches or something like Glass,” DeMasi said.

Companies such as Qualcomm Inc and Fitbit will use the Consumer Electronics Show to showcase wearable fitness trackers and smartwatches, in addition to single- and binocular-lens “glasses.”

“There’ll be a lot of competitive offerings – and I think some of these are going to be really, really well-suited for new kinds of entertainment and gameplay,” Hardin said, without providing details.

To be sure, not all developers think wearable devices are destined for glory any time soon. There are plenty of questions over the price point, limited battery life and other concerns.

Misha Lyalin, CEO of ZeptoLab, which created the hit mobile game “Cut the Rope,” says the category is mostly an R&D project for most game developers at this stage.

“In order for you to succeed as a developer, you have to have a platform that will be massive,” Lyalin said. “It’s too early to place a bet on.”

Venture capitalists are mostly taking a wait-and-see approach, though some want to make sure they are in a solid position, should the devices take off. Bessemer Ventures and Signia Venture Partners, for example, together have invested $2.5 million in Hardin’s Mind Pirate.

Glass has not yet emerged as a mass consumer platform, said Jeremy Liew, managing director of Lightspeed Venture Partners, which joined some other investors to put a total of about $1 million into Lark, a Silicon Valley startup that makes a smart wristband and an app to track sleep and exercise patterns.

“But if it becomes one, that next new billion-dollar company will be built on top of it, and that’s why it’s worth paying attention to,” Liew said.