You are here: Home  /  COMPUTERS  /  Bringing computer education up to code
COMPUTERS

Bringing computer education up to code 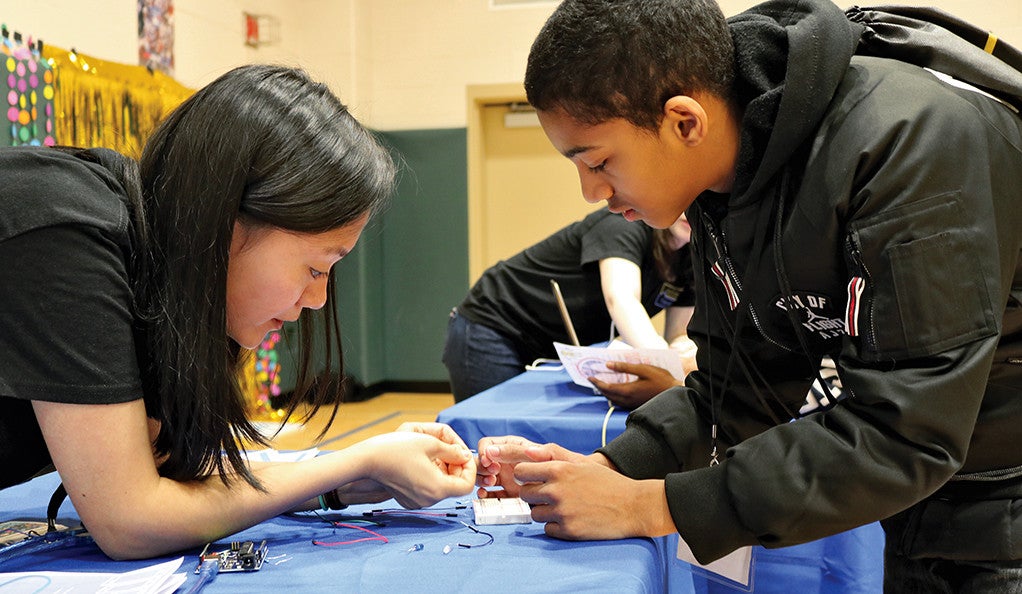 Inside the gymnasium of Bishop Woods Architecture & Design Magnet School in New Haven, about 150 students are showing off the results of months of computer programming work. It’s the last big event of Code Haven, an ongoing alliance between Yale undergraduate students and the New Haven Public Schools.

In addition to Bishop Woods, the students here are representing East Rock, Celentano, Lincoln Basset, Fair Haven, and Wexler Grant. Among the presenters are sixth graders Lana Almalek and Taniya Armstrong, who have developed a mobile phone app that allows them to draw over photos.

“We did this because we both like drawing and sketching,” said Lana. “It was a lot harder than we thought it would be.” She wants to be a doctor, while Taniya has her sights set on becoming a veterinarian. They both expect, though, to continue working with computers.

Now in its fourth year, Code Haven has helped spread an enthusiasm for computers to more than 200 students at multiple New Haven middle schools. About half of those students had no computer science experience prior to Code Haven. Every week during the school year, Yale students go to schools in the New Haven district to teach computing. Online lessons, group activities, and class-wide demonstrations are all part of the lessons.

Code Haven is driven by the philosophy that all students should have access to computer science lessons. While many middle schools in New Haven lack computer science programs, the abundance of knowledge and resources at Yale can go a long way to make up for that.

The large majority of the middle school students are from groups that are traditionally underrepresented in computer science, such as Latinos and African Americans. Code Haven is designed to correct this.

“Right now we have a system where people are not equally exposed to computer science at a young age, and that creates a lack of diversity in computer science in high school, college, and industry,” said Daniel Urke ’21, who is co-president of Code Haven with Stephanie Bang ’21.

Code Haven was founded in Fall 2016 after a conversation between Nathaniel Granor ’09 and David Weinreb, a teacher in New Haven Public Schools. They met at the Yale School of Management Education Leadership Conference. Granor attended as a representative for TEALS, an educational program of Microsoft that promotes computer science at the high school level. The two began talking about the lack of computer science education at the middle school level and saw an opportunity for a group like Code Haven. Granor talked to Computer Science Professor Dana Angluin about the idea, and she contacted Annie Chen ’19 and Dennis Duan ’19 to lead the charge as its first co-presidents.

A pilot semester was launched in Weinreb’s sixth grade classroom at Fair Haven School, with 18 students and 16 mentors. Since then, Code Haven students have made more than 120 apps in 13 classrooms.

For the first half of the year, the students learn the fundamentals of computer science. The lessons are basic enough that even undergraduate students who don’t major in Computer Science can teach them.

“One of the things we talked about when we were recruiting people to be part of Code Haven is that you don’t need to be an expert in computer science because we teach fundamental topics,” Bang said. “One thing that’s exciting about the program is that it could be anyone teaching, as long as they have the basics.”

Students enrolled in Code Haven go during the school day. Code Haven mentors say that’s critical to eliminating the self-selection bias that’s prominent in computer science — that is, students who choose not to pursue it because they don’t think they’re cut out for it.

“Our mission is very much centered around inclusion and increasing access to computer science,” Urke said. “We don’t think you can do that in an extracurricular setting. It’s key that it’s not seen as something like an advanced math program.”

For the second half of the year, the students work on building apps on Android phones (Code Haven recently received a grant from Google IgniteCS to purchase new ones for the students to use).

“We give them one of three variants and when they finish that, they’re able to expand on that with their own ideas,” Bang said. One app features the Mario Brothers chasing mushrooms, and the students can add more levels and more sprites to chase. A second app is illustration-based. The third is a “fortune cookie app” — kind of like 8-ball on the iPhone, where you press a button and get a random fortune.

All of the apps are designed to give enough direction for beginning programmers, but allow enough creative freedom for the students to make it their own.

“It was easy at first, but got harder as we went along,” said Brain Kelson, a sixth grader presenting his app at the Project Fair. He and his teammates chose to make a Mario app.

Beyond developing specific apps, the students learned the broader benefits of programming.

“Being in Code Haven helps me learn about technology and how it can make the future better,” said fifth grader Luis Adoniz Perez.

Computer skills are only part of the lessons that are being learned. Bang and Urke noted that soft skills such as working collaboratively are emphasized. Code Haven also holds a TeachTech conference every year for teachers from kindergarten to eighth grade. There, they offer guidelines on how to implement computer science lessons into the classroom. Other events include Demo Day, in which Yale Computer Science students speak about projects they’re working on and answer questions from the students. For Urke and Bang, though, working directly with the students is the heart of Code Haven.

Weinreb said the time his students have with Code Haven has given them a new perspective on what’s possible.

“By introducing them to a group of Yale undergraduate students who become their friends over the course of a year, computer science becomes a lot more real,” he said. “These people materialize as role models and the students can visualize what it would be like for them to become computer scientists in the future.”

Weinreb, whose students are mostly Hispanic, said work with Code Haven counteracts many of the factors that could steer students away from considering a career in computers.

“The research substantiates that we are advertising computer science and robotics more to boys than girls, and also more to white people than to people of color,” he said. “We have to show them that this can be for them, even if they don’t know people who do it, and even if they don’t yet have role models in their lives who work in computer science and understand information science.”

Granor noted that middle school is a great time for the students to catch the computer science bug.

“That’s when you’re starting to branch out into more distinct subjects but schedule-wise, there’s more flexibility than in high school,” he said. “Getting that first exposure in middle school means they may now be more interested and prepared to take on whatever programs that do exist at the high school level.”

“They were excited when I told them about it,” she said. “And now they enjoy working with the Yale students. At the start of the day, they’ll ask me ‘Do we have Code Haven today?’”