Of grace and grandeur 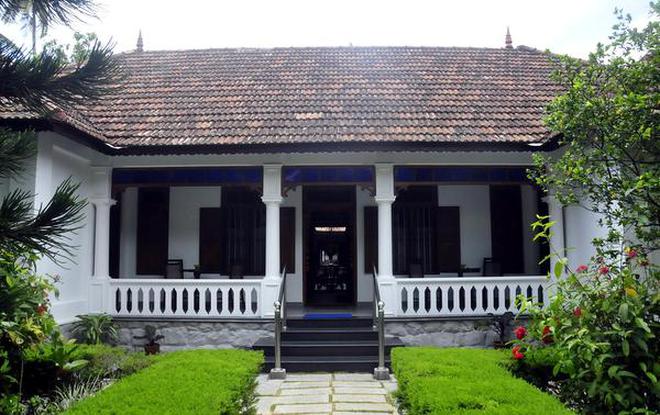 Pitted and dented, with silvery scars from many fillings on its surface, an elderly bronze pot, blackened with age, was gathering dust in a store room. During the renovation of Comath House on C.O. Madhavan Road, Pattoor, Sheela Mohan, came across the pot and fell in love with it. She got it polished and buffed and the, now gleaming, pot has a special place in the Comath household. “It was used to cook rice for the large extended family that used to live here,” recalls Prasad Madhava Mohan, present resident of the graceful house that has been home to three generations of the Comath family.

Bronze pots, brass uruli, ceramic jars and more, perhaps still brimming with forgotten aromas and flavours of the food that was once stored or made in those, have got a second lease of life in the renovated home. Mohan inherited the grand 82-year-old residence from his father, M.N. Prasad, former Chairman of the Railway Board and youngest son of C.O. Madhavan, former Chief Secretary of erstwhile Travancore and first Mayor of Thiruvananthapuram Corporation. “My father told me that my grandfather purchased this plot and had this house built as part of his post-retirement plans,” he recalls.

And now life has come full circle as Mohan and his wife decided to stay in Comath House after he retired as Executive Director of Indian Oil Corporation.

The beautiful house had to be given a facelift to suit the conveniences of a modern family. But Mohan did not want to alter the soul of the home with a thoughtless restructuring that would not blend with the material and texture of the structure built on a raised plot. After some amount of effort and thinking, he chose conservation architect T.M. Cyriac to renovate the house. Mohan and Sheela are all praise for the architect and his team for their work.

“Cement flooring had to be changed as it was too damaged to be restored. Plumbing and electrical work had to be completely redone. But look at those lamp shades with its coloured fluted edges…Those are all original ones. We never knew they were so pretty until they were all cleaned and put up again,” says Mohan.

Now, freshly painted and dusted, Comath House makes a pretty picture. Enclosed within white painted granite walls, a flight of steps takes visitors to the house through an old fashioned garden bordered by hedges. A caretaker and his family, living in a cosy sepoy pura above the garage, which is at road level, keeps an eye on visitors. As we walk to the house, it is akin to a forest bath, surrounded as we are by tall elderly trees, healthy flowering perennials and bushes.

A long verandah with two bedrooms on either side of it is a common feature of traditional homes in Kerala. Comath House is no different. Blue glass panels below the roof of the verandah bring in a dash of colour to the verandah furnished with lovely antique furniture. The single-storeyed building that is more than 3,000 square feet has all those little embellishments that made many homes in Kerala a testimony to the skill of unknown masons and carpenters who left their stamp of artistry on their work. 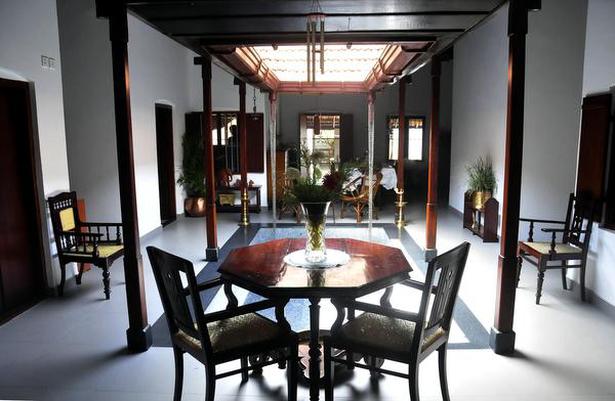 Wooden brackets with simple yet fine carvings, delicately worked thoovanam and heavy wooden doors have been polished to highlight the deep rich tones of teak and rosewood. The high wooden ceiling too has been treated with care.

While one of the bedrooms to the side of the verandah has been turned into a TV room, the other, used by the patriarch himself, has a regal planter’s chair, a sturdy office table and comfortable chairs. “This was where my grandfather used to sit and my father never used that planter’s chair as a mark of respect for his father. But I would like to use it,” admits Mohan with a smile. 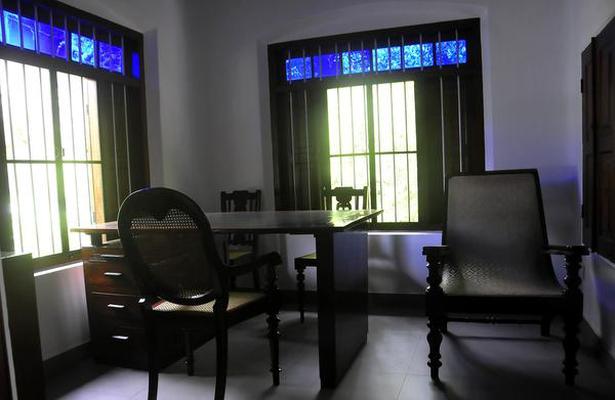 Each of the rooms has large windows that bring in sunshine and fresh air into the interiors. The verandah leads into a living room that has a mix of old and new furniture.

The white painted walls are quite bare but for photographs of his parents, Prasad and Vasanthy Prasad. “The entire house is made of lime and plaster and so it is extremely difficult to put in nails into the thick walls.

The walls keep the house cool but makes it difficult to hang anything on the walls,” explains Sheela. 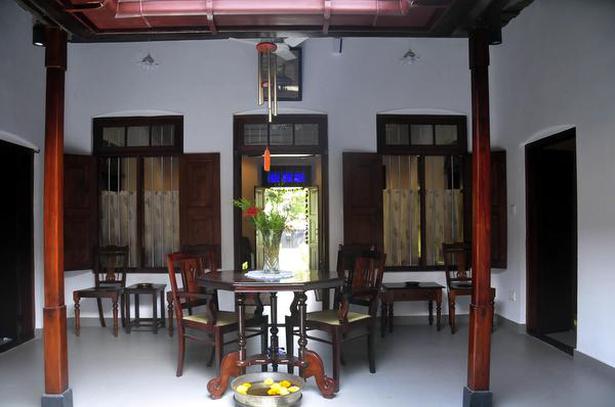 Two bedrooms that open into the living room have attached bathrooms and are also connected to the bedrooms that open into the verandah. The living room leads into a spacious nadumuttam or inner courtyard, the pride of every traditional Kerala home, which has been carefully retiled and given a facelift. “It was elevated and the flooring was changed. But I want to keep it open to the sky. Nothing like watching the night sky while sitting inside,” insists Mohan.

The nadumuttam, an organic space that envelopes and connects the formal and informal areas in the house, leads to a dining space and has verandahs on two sides of it. A spacious pooja room on one side has been divided into two rooms. Vintage pictures of gods and goddesses evoke nostalgia.

The verandahs around the house have been retained while some of the space was taken in to add bathrooms or enlarge existing ones. The open verandah on the eastern side opens into a small verdant space with a grand old Ashoka thechi. “The compound wall on that side has the picture of a sun etched on it to indicate that is the east,” points out Mohan.

The verandah on one side now opens into a new garage and a new entrance that was created as the main road has become extremely busy. All around the building, there are fruit trees in plenty – cherry, mulberry and a gnarled old mango tree. “It is a Kalapadi, which yields the sweetest mangoes I have ever eaten,” asserts Mohan. 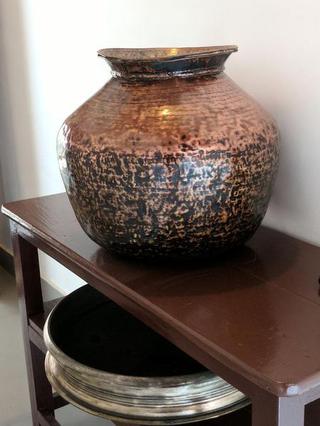 A bedroom to the side of the dining room has also had some amount of restructuring done to it. Once upon a time, it must also have functioned as a labour room for women in the house. Now it has a luxurious bathroom and a dressing space too.

The dining area is now connected to a large modern kitchen with all amenities. Earlier, a long corridor used to connect the dining room to the kitchens. Although the structure still exists along with the roomy old fashioned kitchen, it is now rarely used.

One corner of the compound has a well, a perennial source of water. In fact, Mohan points out that a few years ago when the city was reeling under a water shortage, the well proved to be a blessing as it was still brimming with water.

As the couple walk me around the house and the compound their pride in their heritage is evident. Every nook and corner in the home has been attended to and its shows in the beautifully harmonised interiors and exteriors.

Seasons in the sun

“In those days, like many homesteads in the city, there was a cattle shed and a coop for hens. Paddy used to come from our ancestral village in Kayamkulam, by boat to Vallakkadavu and from there by bullock cart to Pattoor. Four men used to accompany the paddy and they used to boil the paddy, dry it and so on…. There was a pathayam near the kitchen, in which the paddy was kept. I also remember them bringing raw cane, which was then boiled and dried and cut thin to be woven into chairs and beds. I vividly remember the annual ritual when all the cots were striped of mattresses, put in the sun and boiling water poured over it to get rid of bugs,” remembers Dr. S. Venugopal, C.O. Madhavan’s eldest daughter Gomathy’s son.

Not only was he born in Comath House, he also spent a good deal of his childhood there. He says he can’t remember a time when the house was not full of people. There were relatives and cousins who came to the capital city to study, attend interviews or write examinations. At times, some of them were housed in the sepoy pura too. After his grandfather passed away, his grandmother, Thulasi Madhavan, ran the household on her own. He recalls two of his aunts’ marriages that were conducted in the house when pandals were put up in the front yard and the grounds covered with white sand. Prior to the wedding day, there would be dance and music recitals in the evenings. He remembers his grandmother taking care of the garden.

Tag and grace grandeur of