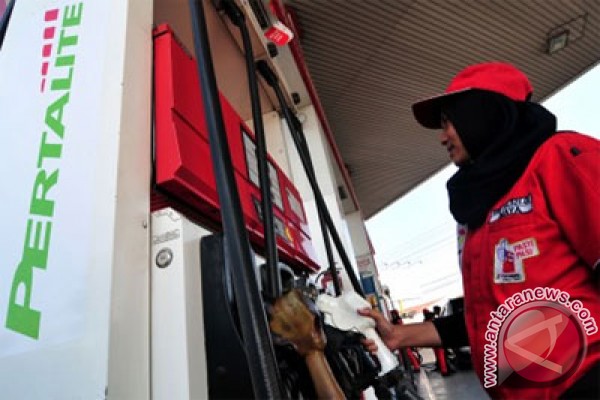 Photo document officers preparing to fill fuel oil type Pertalite RON 90 for a vehicle at the oil & gas station Muri, Tegal, Central Java. (ANTARA/Oky Lukmansyah)
Medan (ANTARA News) – State-owned oil and gas company Pertaminas region I for North Sumatra announced the results of a draw of the coupons of its Pertalite fuel sales, Monday, for the winners of a motorcycle and 94 cellphones.

The event in Medan was part of Pertaminas coupon-drawing program to be held across five cities in the country where five motorcycles and 800 cellphones will be given as prizes.

Pertaminas Communication and Relations Area Manager for Northern Sumatra Fitri Erika noted on Monday that the coupons were collected from the sales of Pertalite fuel from January 4 to March 31, 2016.

Each motorist who bought Pertalite received a sales coupon for a transaction of at least Rp20 thousand for motorcycles and Rp150 thousand for cars.

Motorists receiving the coupons are required to fill in their personal data or complete identification information and then put them into drop boxes available at various public refueling stations.

The draw of the Pertalite sales coupons will be conducted in five cities: Medan in North Sumatra on April 11, Makassar in South Sulawesi on April 14, Surabaya in East Java on April 18, Semarang in Central Java on April 22, and Jakarta on April 25.

Pertamina spokesman for North Sumatra Waliyono stated in the province that a total of 722,373 coupons were received, but only 490,8383 were eligible for the draw as the remaining ones had incomplete data.
(Uu.A014/INE/KR-BSR/F001)