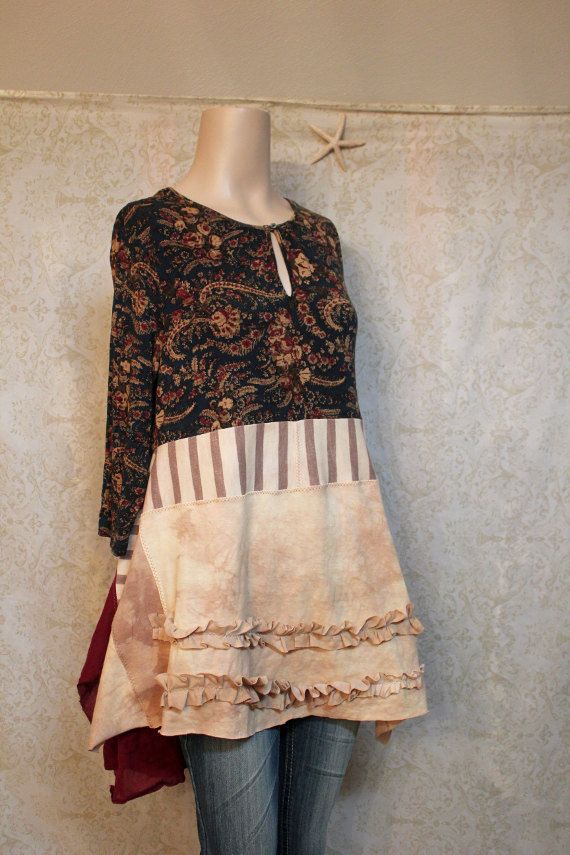 What’s a hot trend in high-end fashion? Getting shoppers to pay just as much for used clothes as they do for new ones.

Many designers are putting luxury spins on second-hand clothing, repurposing them under the mantle of sustainability to appeal to socially conscious customers. Their pitch: Getting a handle on the waste generated by an industry that doubled its clothing production between 2000 and 2014, according to McKinsey & Company.

Polo Ralph Lauren, Missoni, Vetements and other labels are digging into their archives or scouring vintage stores for old garments that can be refashioned into different ones, a practice they call upcycling. Designers say they are extending the life cycle of clothes that might otherwise be discarded in landfills. It also means that some customers are paying as much or more for old, often previously worn, clothes as they would for a brand new garment.

New jeans made with old Levi’s at Vetements, the buzzy Zurich-based fashion label, sell for about $1,500 a pair. (On the Levi’s website, many styles of new jeans go for less than $100 a pair.) In Vetements’s Fall 2018 collection, a fur coat made from a reworked vintage fur piece, costs $22,950. 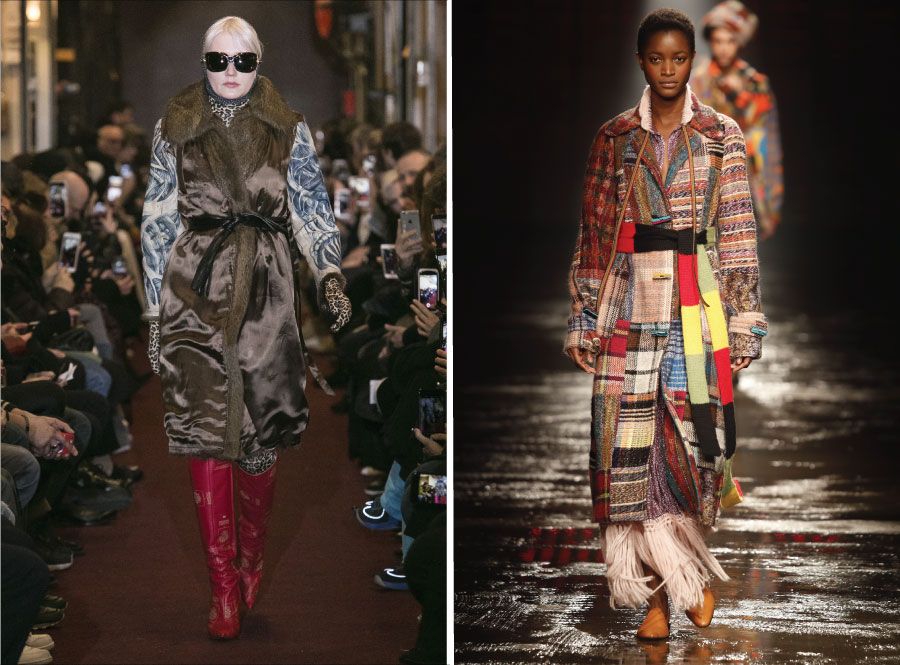 Upcycled looks that appeared on runways for Fall 2018 collections include, left, a reworked fur coat at Vetements, and a limited-edition patchwork coat at Missoni.

Missoni, the luxury, family-run Italian label known for colorful and zigzag knits, displayed a patchwork coat and loose-fitting patchwork trousers made with upcycled vintage fabrics in a recent runway show. The patchwork coat will set a customer back $11,760 while the patchwork pants will cost $2,190. They are part of a limited-edition series of 25 garments made with upcycled vintage fabric that will start arriving in stores in July.

At the haute couture level, where creations can cost thousands of dollars, the designer label Viktor & Rolf has repurposed vintage gowns into new frocks for recent collections it calls “conscious.” “We feel strongly about this approach,” the designers Viktor Horsting and Rolf Snoeren wrote in an email. “To create something beautiful from old pieces that were left behind makes sense for us especially today with all the ecological problems.”

Upcycling often requires labor-intensive and time-consuming reconstruction and piecing together, experts say, which add to the cost. “It actually requires more creativity and ‘out-of-the-box’ thinking to re-imagine an existing garment and create something spectacular from it,” said Asta Skocir, an associate professor of fashion design at the Fashion Institute of Technology in New York, where upcycling is part of the curriculum. 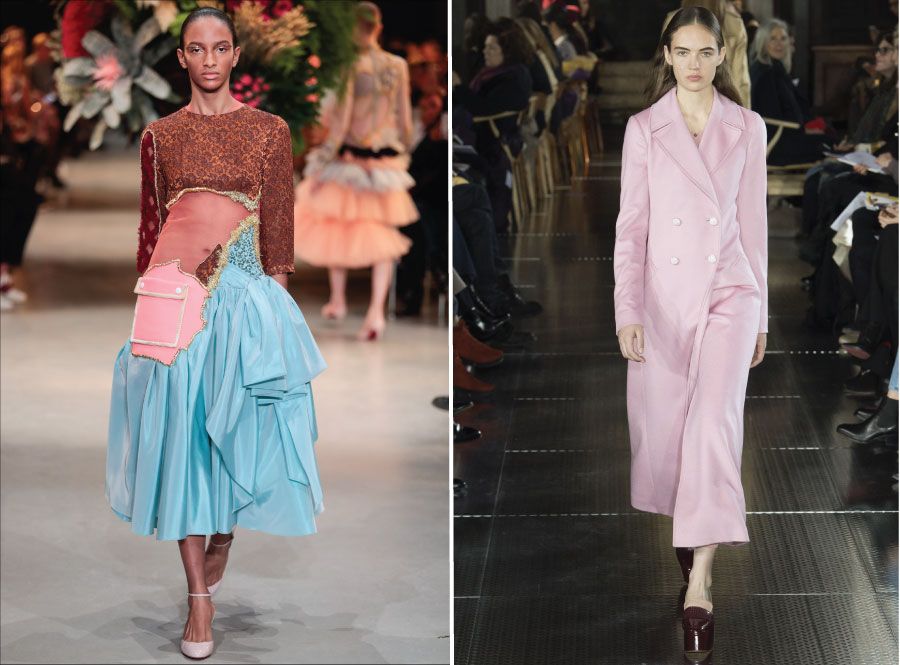 Some consumers will pay a lot for high-end garments made of old clothes and fabrics in part because they are one-of-a-kind, says Anna Ross, associate editor of womenswear at trend-forecasting firm WGSN. There is “an individuality to re-made” clothing,” she says. “Everyone likes having something which only they have.” But an eco-conscious backstory seldom is enough: A garment also has to look desirable. “I’m not entirely sure the reason people are buying Vetements is because they’re buying into upcycling,” Ms. Ross says. “But you never know!”

Upscale women’s label Eileen Fisher has a line called Resewn, which transforms old, used and damaged Eileen Fisher clothes into new garments. One such creation is a denim jumpsuit made of five pairs of old jeans. Initially, the prices for Resewn items were “pretty close” to ones for new Eileen Fisher items, says Carmen Gama, the line’s designer. That’s because it took a while for Resewn to work out the kinks. “We have come to a place where we are now able to reduce a lot of our steps to maximize our production,” Ms. Gama says. Shoppers pay 25% to 30% less for Resewn clothing than for the main Eileen Fisher line. Ms. Gama doesn’t expect Resewn prices to approach the main line’s prices “unless it’s a super, one-of-a-kind design.”

Beth Trent, a longtime customer, says she doesn’t mind if some Resewn items aren’t less expensive than Eileen Fisher classics. The Resewn clothing is different from other Eileen Fisher pieces she owns. “They take different kinds of fabrics and put them together in ways that are just wonderful,” Ms. Trent, a New York-based attorney, says. “They are unique and, in a sense, new.” She also believes that Eileen Fisher fabrics, whether old or new, endure: “In the end when things last that long, it doesn’t matter if it’s made of repurposed fabrics.”

For Eileen Fisher’s Resewn line, a denim jumpsuit was created from five pairs of jeans. PHOTO:PHOTO BY LUCAS VISSER, STYLING BY KEIKO ISAYAMA

Designers and retailers are marketing reused luxury clothes as a way to be environmentally friendly as more consumers, especially millennials and Generation Z, express interest in sustainability. According to a 2017 study by Mintel, 18% of 1,006 female Internet users in the U.S. age 18 and over who bought clothes for themselves in the 12 months leading to April 2017 said they were interested in more eco-friendly fabrics. That share increases to 33% for women ages 18 to 24. Younger consumers will pay more to support brands that invest in causes they care about as long as the brands are clear about how they make and price their products, said Alexis DeSalva, a retail and apparel analyst at Mintel.

Variations on upcycling abound in the fashion industry. To help reduce waste, designer Gabriela Hearst uses leftover fabric in her collections. Ms. Hearst, one of five nominees for the Council of Fashion Designers of America’s top womenswear award this year, also recently made silk twill sandals with fabric from previous seasons.

Upcycling is part of the curriculum at many fashion schools. “We’ve seen a range of student collections come out with that in mind, both at the undergraduate and graduate level,” said Burak Cakmak, dean of fashion at the New School’s Parsons School of Design. He noted that one of the school’s recent graduates, Kozaburo Akasaka, whose high-end Kozaburo line includes repurposed jeans, was short-listed last year for the prestigious LVMH Prize for young designers. The line is sold at Dover Street Market and Opening Ceremony, another avant garde retailer as well as a brand of clothing.

Since 2013, students at Pratt Institute have had to upcycle clothes into new designs. The goal is to have job-hunting graduates well-versed in sustainability, said Kelly Horrigan, an adjunct professor, who is also the departmental sustainability coordinator and coordinator of curriculum integration for design. A year ago, the school began working with Brooklyn-based Fabscrap to recycle leftover bits of fabric.