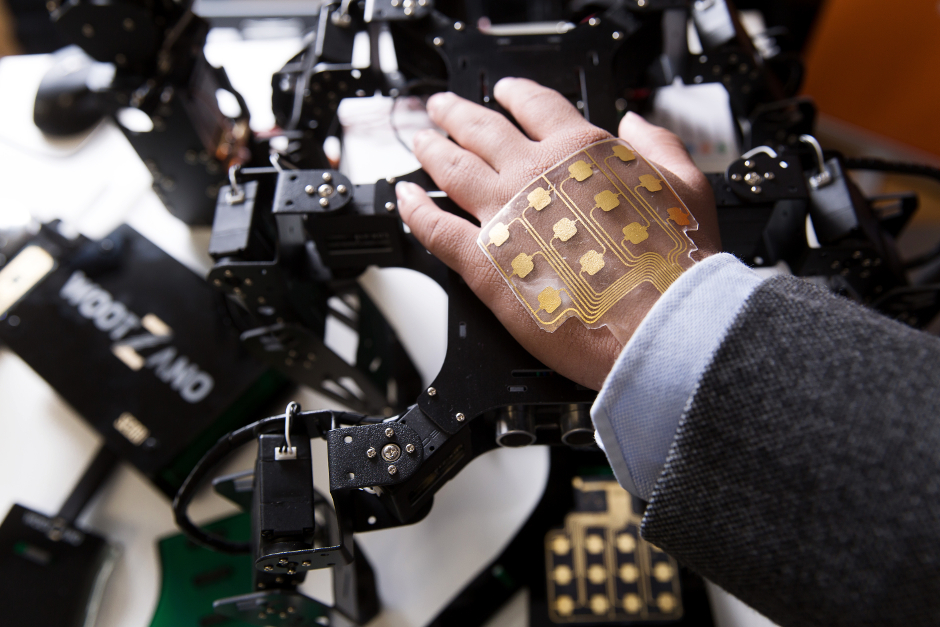 Known as Wootzkin, the electronic skin is designed to allow robots to complete tasks requiring greater dexterity, such as handling soft fruit.

The skin, developed by Edinburgh and Sedgefield-based Wootzano, was presented at the Annual Showcase of the Royal Academy of Engineering’s Enterprise Hub in May.

The Wootzkin, which is made of a specially-modified elastomer with metal electrodes deposited on top using photolithography, can be bent, stretched and twisted without causing any damage to the sensor.

The skin has piezoelectric and piezoresistive sensing capabilities, meaning it can be used to measure force and pressure, and is also embedded with temperature sensors, according to its developer Dr Atif Syed, founder and CEO of Wootzano.

“We’re trying to make something that is akin to human skin, so it can give the robot feedback on force, pressure, temperature, and humidity,” he said. “And it can also go beyond human evolution and smell when it is touching a particular object.”

Syed began developing the technology in 2013 while undertaking his PhD at Edinburgh University, for use in targeted drug delivery. However he soon realised the skin could be used to solve many of the problems facing roboticists trying to develop robots capable of performing dexterous tasks like grasping objects.

As well as the skin itself, the company has also developed machine learning algorithms that allow the robot to learn how to touch and handle items through reinforcement.

The electronic skin can be used in agritech, to allow robots to safely pick and pack delicate fruits and vegetables without damaging them.

The company is also investigating the use of the skin in prosthetic limbs, to allow wearers to feel objects and surfaces that their robotic arm is touching.

“And as well as making sensors for hands, we also make them for feet, because they also come into contact with the environment,” said Syed. “Sensors for robotic feet will allow robots to walk on difficult surfaces, by allowing the robot to control itself as it is walking.”

The technology is suitable for scaling up to mass production, Syed said.