You are here: Home  /  COMPUTERS  /  Windows 10 launched: A fresh start, and a few bugs
COMPUTERS

Windows 10 launched: A fresh start, and a few bugs 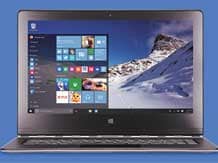 Microsoft’s much-awaited Windows 10 (W10) operating system was finally released on Wednesday, and the first impressions suggest it might be here to stay for quite some time. While the general response seemed to be positive, some security experts raised red flags, especially about Microsoft Edge, which replaces the Internet Explorer web browser in W10.

A blog on cybersecurity company Trend Micro points out a vulnerability Microsoft Edge might have. “Microsoft Edge has integrated two widely used plug-ins into the browser itself: Adobe Flash and a PDF reader. Flash has proved itself to be a significant security risk for many years….Attacks targeting Flash will continue to be a problem, and having it as a built-in feature may pose risks down the road,” the blog by Henry Li, a threats analyst, says. “Similarly, an integrated PDF reader in the module windows.data.pdf.dll. This could also become a potential target for an attacker looking for a way into the Edge browser.”

Across the media, Edge has been reported as a ‘revelation’, with reviewers calling it a slick and simpler version of the Google Chrome browser. According to a Daily Telegraph review, ‘favourites’ lets you bookmark a page and cache it for reading offline; ‘web note’ allows you to annotate live pages and save a screenshot of the page, and ‘share page’ lets one send a link to friends via email or a social network.

But Li also points to another vulnerability within the browser, a javascript code that has led to vulnerabilities in other browsers, too.

Microsoft, in its response, said: “Microsoft Edge includes improved security over existing browsers, enabling customers to confidently experience the web from Windows.  We are also bringing support for extensions to Microsoft Edge at a later date,” a spokesperson for the Redmond-based company said. He also directed us to a blog on its website which detailed the browser’s security features. According to the blog, Microsoft Edge provides “sandboxing”, where the part of the browser that renders the web content runs with less privileges than the browser controls (such as the back button) and the user.

“This provides the user with a level of protection should a malicious web site exploit a bug in the browser or one of its plugins, in that the attacker is now stuck inside the sandbox and does not have full access to all of the user’s resources,” the blog says. “Thus every internet page that Microsoft Edge visits will be rendered inside an app container, the latest and most secure client-side app sandbox in Windows.”

Online, there was a lot of chatter about Wi-Fi Sense sharing Wi-Fi passwords, though Microsoft denied it. “Wi-Fi Sense gives people choices and benefits. What it doesn’t do is reveal passwords, allow your friends to share your Wi-Fi with their friends, nor does it put your personal information at risk,” said a Microsoft spokesperson.

Billed as the final version of Microsoft’s Windows OS, W10 has been described by major tech websites and reviewers as “defying reviews”. This is primarily because W10 “is not a finished product, and will never be so”, as Microsoft intends to update it frequently, customising interfaces, features and more.

Besides, W10 is not quite a uniform package of features. According to a Gizmodo report, Windows 10 user experience manager Mohammed Samji is fond of saying: “We’re making pizza for 1.5 billion people. What topping do you want?” That basically means each person will be installing it with different apps and choosing different features, setting up his or her own unique version of W10.

The response, if not the ‘reviews’, has been positive. Users find W10 a definite improvement over the Windows 8. For starters, not only is the much-loved and much-missed start menu back, it also brings along a powerful system-wide search that users are describing as an offline Google for your system, such that it gets you exactly what you are looking for, even when your search word has typos.

Cortana, too, has hit the right notes. The voice-activated search and help engine, reads and responds to even complex commands and comes up with precise results. Most users citing multitasking as their priority have found Cortana a gift.

The ‘Action Center’ replacing the Charms bar is much more useful, providing notifications and quick access to settings. And, it is snappier when it comes to speed and responsiveness. However, some bugs need to be fixed. According to a Daily Telegraph live blog covering the W10 launch, there were several complaints from new users. While many said the W10 update was slow to install, others reported some promised features, including Cortana, wouldn’t be available for some time.

One user even complained about a blue screen.

The saving grace, of course, is W10 will be a perennially developing OS, and therein is a chance of bugs being fixed in the near future, with each update. That also means constant dependence of the user on Windows updates, which have consistently proved the nemesis of speed!

Tag A fresh start and a few bugs Windows 10 launched