You are here: Home  /  CLOTHING  /  Where Are Our Useful Futuristic Clothes Already?
CLOTHING

Where Are Our Useful Futuristic Clothes Already? 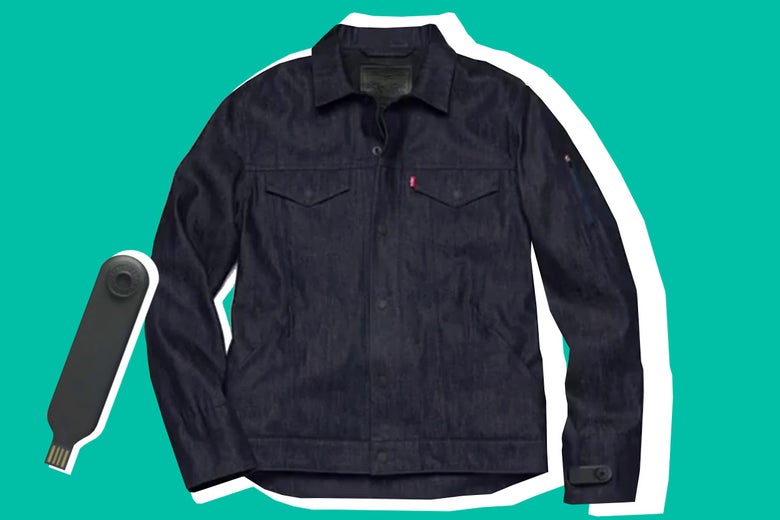 Remember the old days, when you had to pull out your handheld telephonic device and unlock it—using your thumb!—in order to check the location of your incoming human-operated rideshare? How archaic! Or what about when you wasted valuable seconds opening an app and holding down on the screen, just to drop a virtual pin on a virtual map. Positively primitive. Fortunately, those days are behind us.

Earlier this week, Google rolled out several new features for its Levi’s Commuter X Jacquard by Google, a jean jacket that pairs a user’s phone with multitouch sensors woven into its sleeve. The updates build on the features first included with the $350 jacket, designed with cyclists who can’t look at their screens in mind, including enabling its wearers to do audio-based digital tasks such as pausing their music, finding out the time, receiving their next direction, or answering a call with the brush or tap of their denim cuff.

Among the new functions: sending ride-sharing alerts, such as notifying you when your Uber is nearby and when it arrives; activating Bose’s “Aware Mode,” which allows headphone-wearers to hear what’s happening around them; and saving locations, also known as dropping a pin.

As TechCrunch points out, ride-share support is an interesting direction for a smart jacket originally marketed to bike commuters. The Uber and Lyft functionality doesn’t seem to fit in with that ethos. Instead it seems Google is now targeting those who simply don’t want to get their phone out (or get it out again, that is; they’ll still need to use their phone to summon the car). Or, perhaps, for people drawn to the futuristic functionality of being able to swipe the cuff, which acts a bit like a hidden smartwatch-sans-screen, to summon a car secret agent–style. (Though, to be sure, the jacket’s style is more Spy Kids than James Bond.)

This move toward more everyday capabilities for its connected clothing platform reflects both Google’s attempt to “become an extension of your very self” and a larger trend of companies going big on wearable tech. Such smart devices—which include things we wear over our eyes (think Google Glass or Snapchat’s Spectacles), in our ears (Apple’s Airpods), on our wrists (Fitbits), and on our bodies (like Jacquard)—represent a rapidly growing sector. And of all the kinds of wearables, it’s “connected clothing” that’s expected to grow the fastest, according to industry analysts.

These textiles of tomorrow probably won’t involve functionality like Back to the Future’s self-drying jacket or self-lacing shoes (or, rather, mostly won’t). Instead, much of the apparel on offer now seems aimed at simply connecting clothing-based sensors to the wearer’s phone. Beyond giving new meaning to the phrase “smartly dressed,” these connected threads seem largely aimed at allowing us to avoid touching our other smart devices by letting us double-tap our cuffs or collars to perform certain digital functions. (Congrats, both you and your suit can now be tools!) But how revolutionary is smart clothing that merely saves us getting our phones out? Where is the truly avant-garde—or at least more functional—attire we were promised by the movies?

It may be coming eventually. As of now, there are already a few exceptions on the market, most notably for athletes and/or those who love to self-quantify. Wareable, a site dedicated to wearable technology, compiles a number of these existing smart sportswear items: pulsing yoga pants, heart rate–tracking shirts, metric-measuring running shorts, distance-recording sports bras. There’s also wearable tech that promotes health and prevents harm, such as UV level–monitoring bikinis for beach bunnies, pressure- and temperature-sensing socks for diabetics with nerve damage, and even a prototype respiratory rate– and blood oxygen–measuring hat for babies in the developing world.

These textiles-of-tomorrow probably won’t involve functionality like Back to the Future’s self-drying jacket or self-lacing shoes.

But futuristic attire with more practical functions—more practical than tracking you and saving you from the indignity of pulling out your phone, that is—might take a while for those of us not interested in a quantified life. Charging capability for our outfits might be the next big innovation. For example, in 2016, a Seattle-based startup and crowd-funding darling known for making travel jackets attempted to raise funds for a line of clothing that would wirelessly charge devices. Despite much hype, the team canceled the Kickstarter campaign, saying they “determined we need to go back to the drawing table.” In recent years, a Dutch designer has been incorporating solar technology into her couture designs. Scientists have also invented a fabricthat can generate its own electricity from light and movement.

Clothing may soon be made better at one of its original functions, too: Regulating body temperature. Microsoft researchers have created a smart scarf prototype that can heat up and vibrate on command. Ralph Lauren developed a self-heating jacket for the U.S. team at the 2018 Winter Olympics in South Korea by integrating heat-conducting ink. This kind of technology, though in its early phases, seems poised to provide more practical applications—namely, keeping people warm—than the less-than-mass-appeal of, say, smart suits that save finance bros from having to exchange paper business cards. Researchers at RMIT University, meanwhile, have invented clothes that can wash themselves (something that may be the biggest revolution in household work since the laundry machine—the rare technology that primarily saves time for women!).

Silicon Valley is not exactly known for its fashion, but it is known for its penchant to technify anything: forks, coffee mugs, toothbrushes, umbrellas. With technology infiltrating our most personal spheres, what could be more intimate than the clothes that we wear?

*Correction, May 18, 2018: Due to a production error, this article initially published with incorrect art. It has been updated.

Tag Already are clothes Futuristic Our useful where